My first job out of a college was a wee bit stressful (euphemism) and as such, my coworkers and I would regularly leave the office at the end of the day in search of a cocktail. Our office was located in the Seaport and one of our favorite spots within walking distance was Lucky's Lounge.

To me, the best part about Lucky's in that you have to be "in the know" to even stand a chance of finding it. Who doesn't like to be part of something top secret?

This is the entrance to Lucky's: 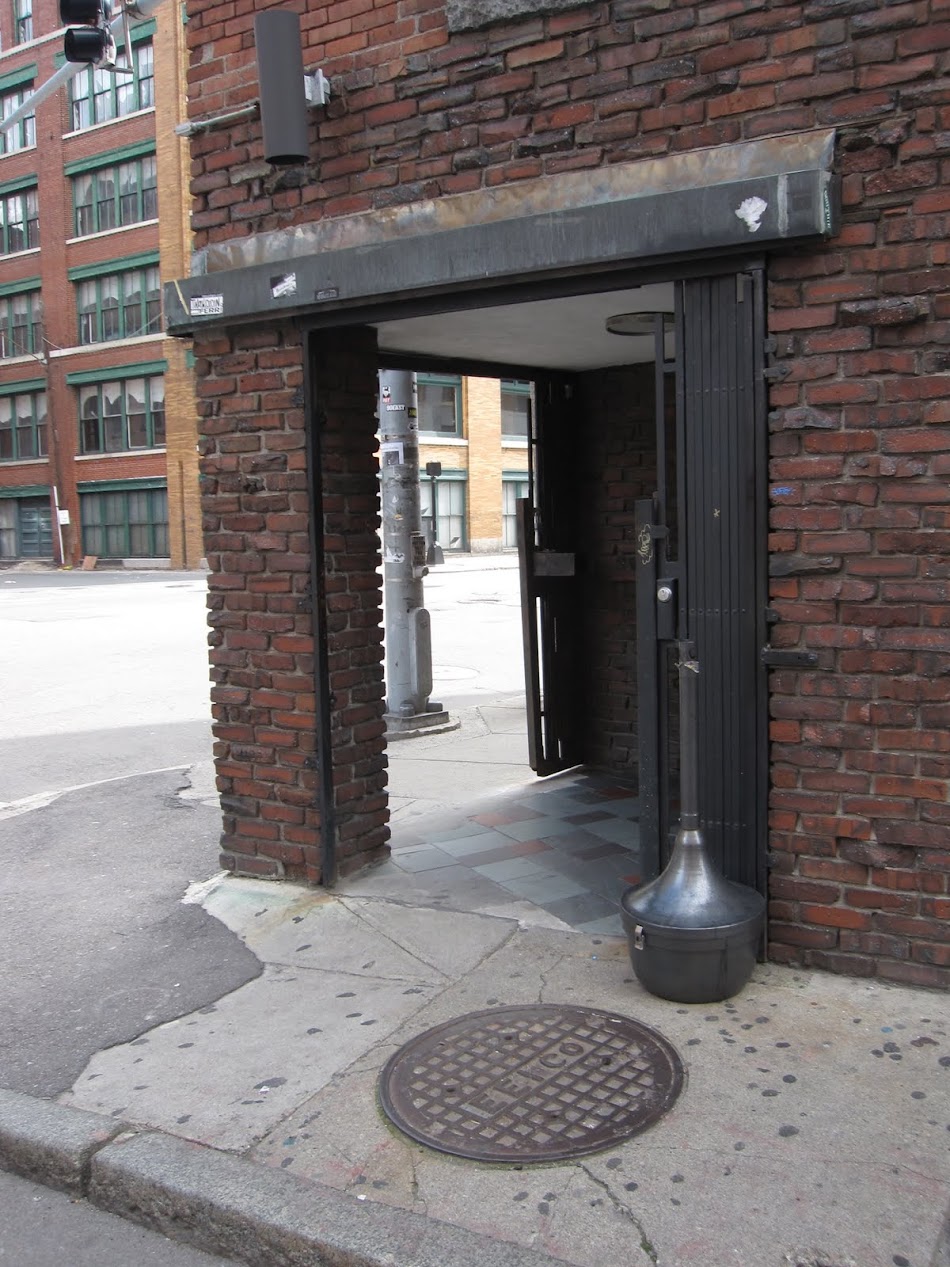 I know what you're thinking, "Gee, that's helpful, I'll never find that random brick building!" That's right, you won't. But since I like you, I'm going to help you out. Lucky's is located on the corner of Congress Street and A Street in South Boston, directly under the A Street sign. 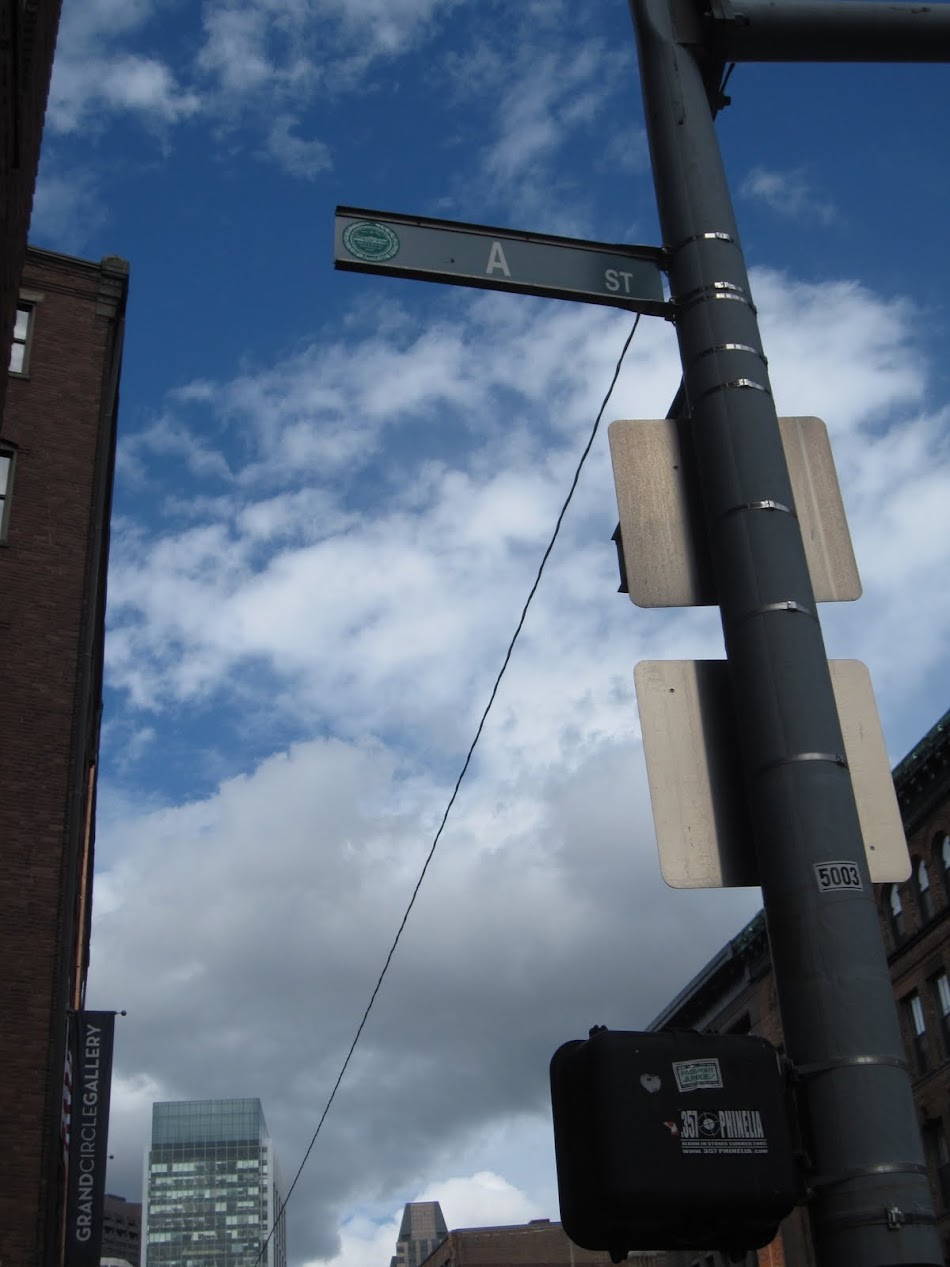 As I said, I've been to Lucky's countless times, but that was always for after work drinks or dinner. I knew they had a Sunday Sinatra brunch, but I'd never had the chance to check it out. Enter my friend, Rue La La.

Rue La La had a deal where you paid $30 for $50 worth of food and drink at Lucky's Sunday Sinatra brunch. Purchased! 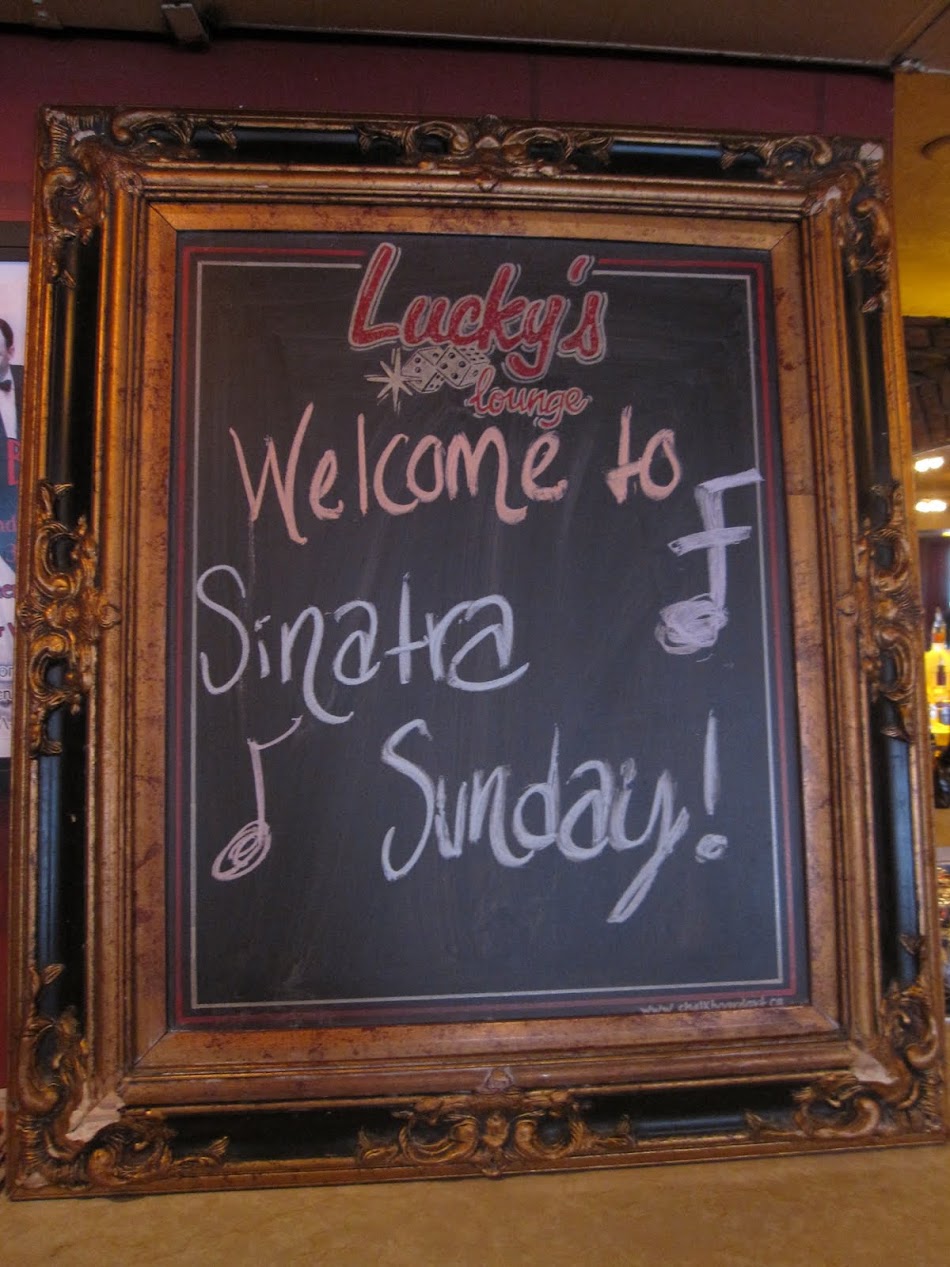 Yesterday morning at 11:00am I met my friend and coworker outside Lucky's (I knew she'd never find it) and we couldn't wait to head in. We had a reservation (love places that take brunch reservations no matter how small your party is!) and we were seated immediately in a big, comfy booth. 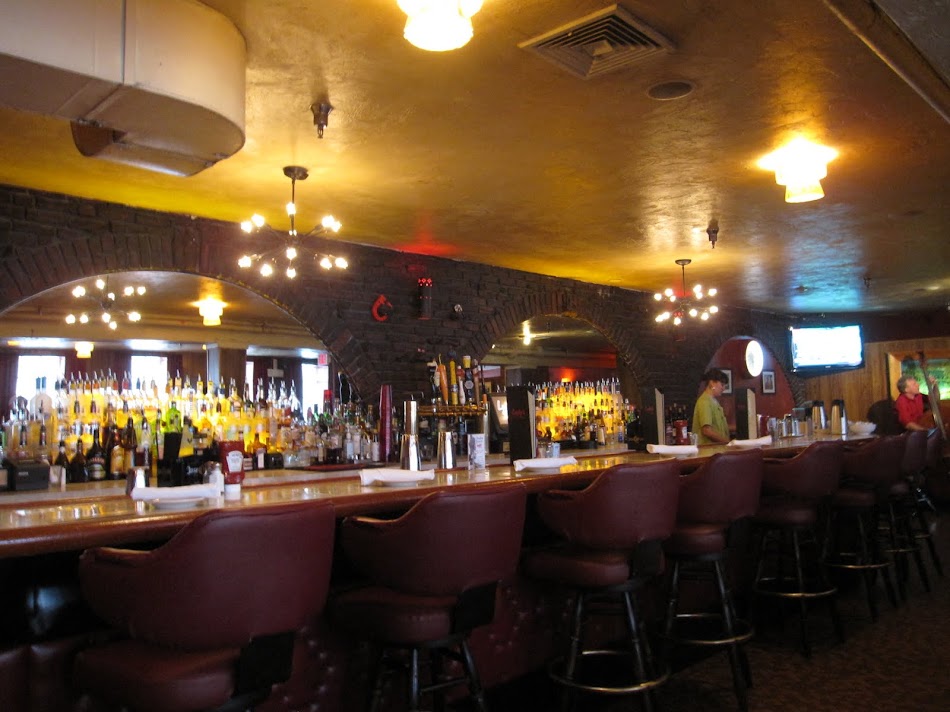 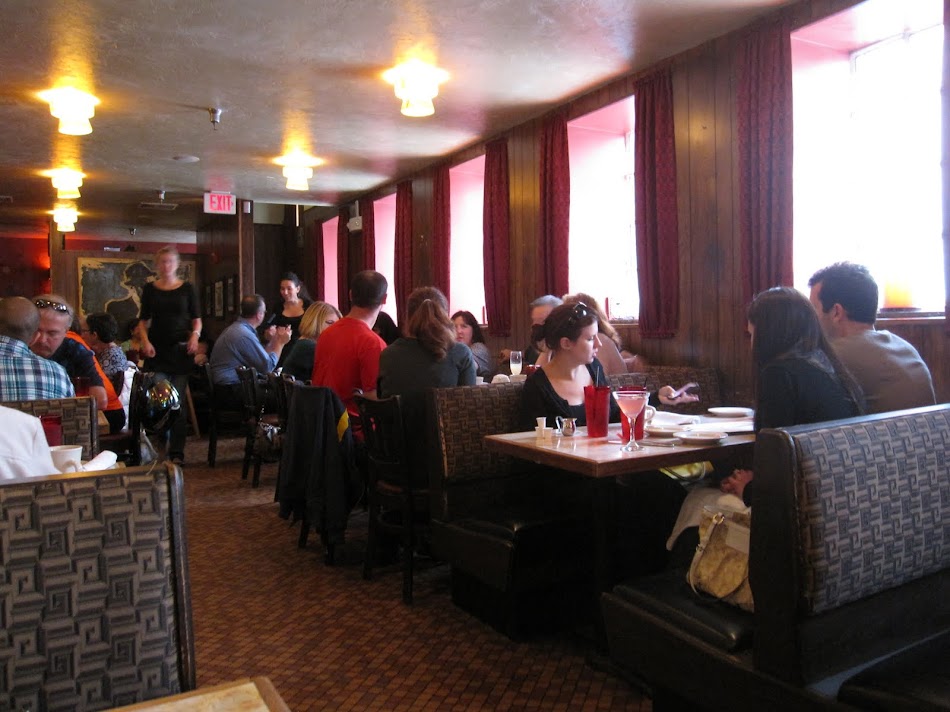 All of the locals were seated in the booths in the front window. Clearly the VIP spot.

As soon as we sat down I noticed the Sinatra cover band. A keyboard player, a guy playing the upright bass and a singer who sounded exactly like Jamie Cullum when you closed your eyes and just listened to him crooning. 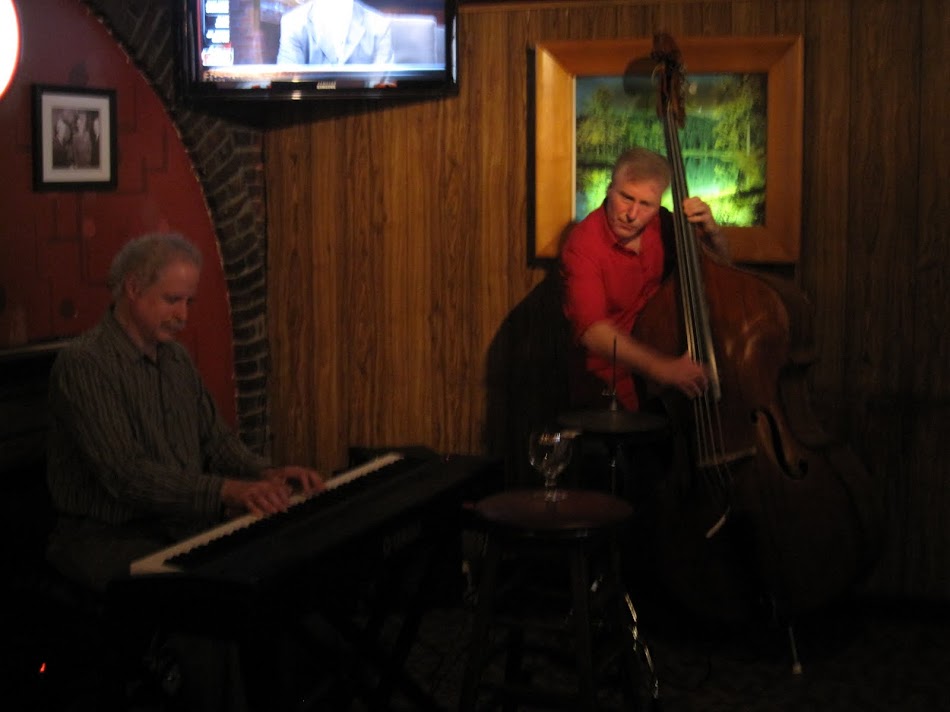 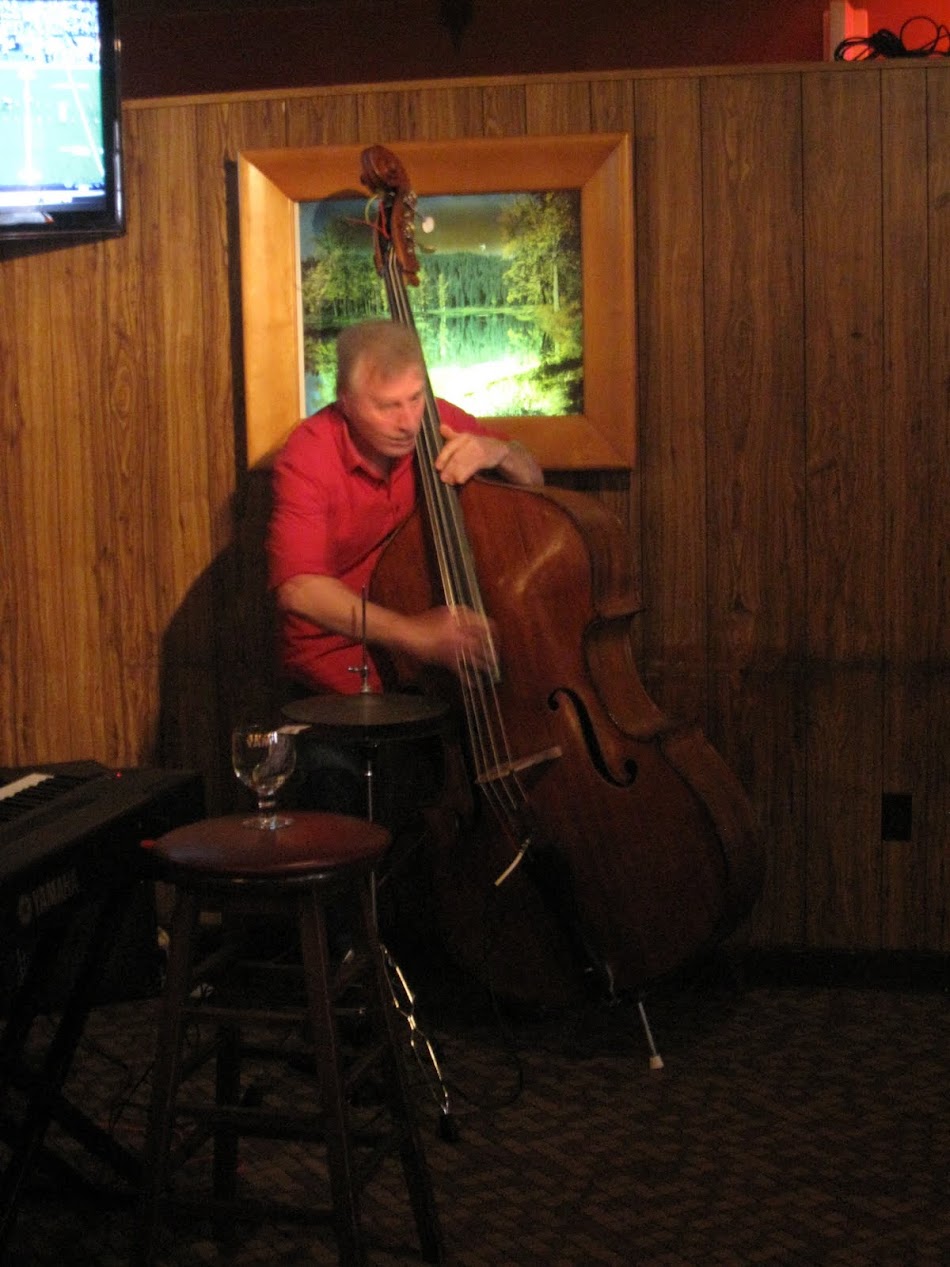 I am in love with this band. The bass player was out of control amazing and they did so many jazz standards that I grew up listening to: "The Way You Look Tonight", "L-O-V-E" and "The Best is Yet to Come." My parents are the two biggest jazz music fans on the planet, thus I knew the words to every song.

Our waitress came over and introduced herself and brought us the brunch menu. 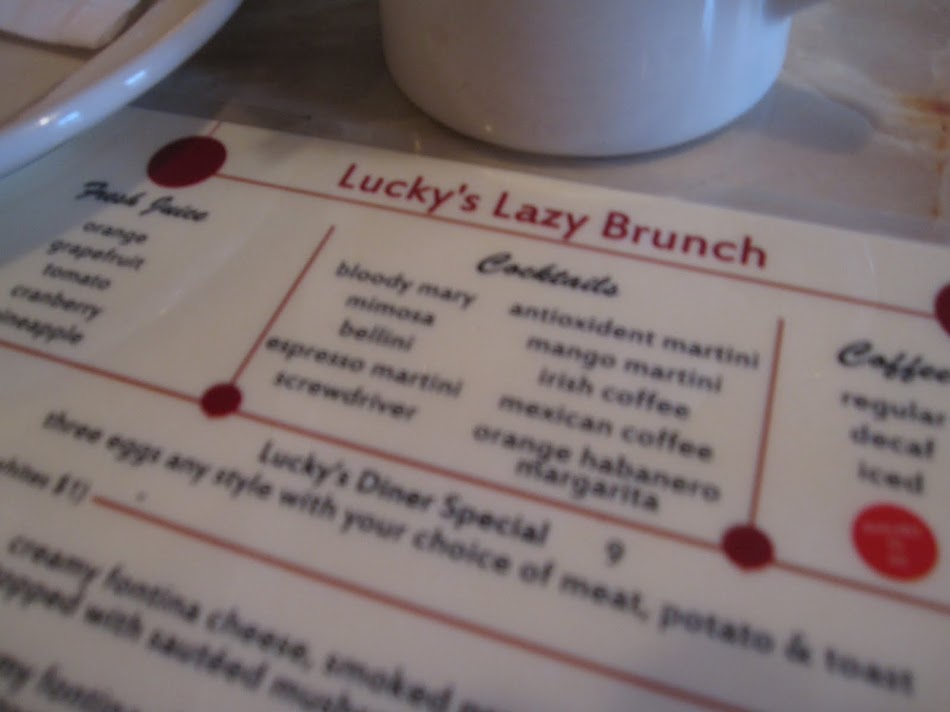 We were also delivered a small plate with two slices of cinnamon coffee cake. The cake was underwhelming, but fine to nibble on while drooling over the fantastic menu. 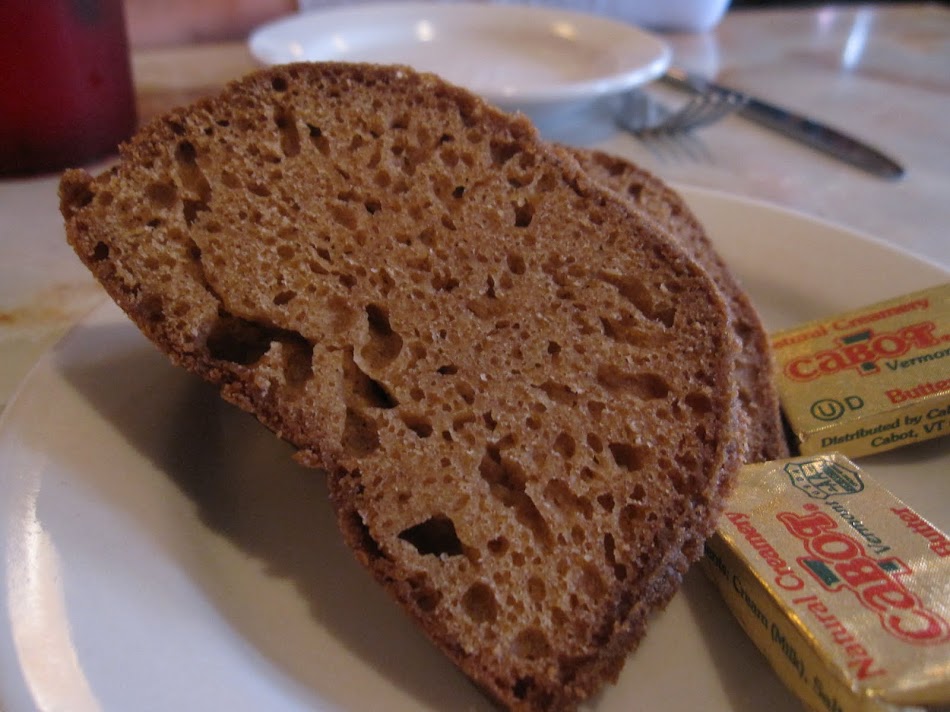 After much deliberating, we both decided to order the vegetarian omelette which came with fontina cheese, spinach, mushrooms, tomato and asparagus. With the omelette you get a choice of potato: home fries, hash browns or tater tots. Naturally we both selected the tater tots.

The meal came in such a nice presentation! I was expecting the asparagus to be inside the omelette, but it actually came on top, which was equally delightful. 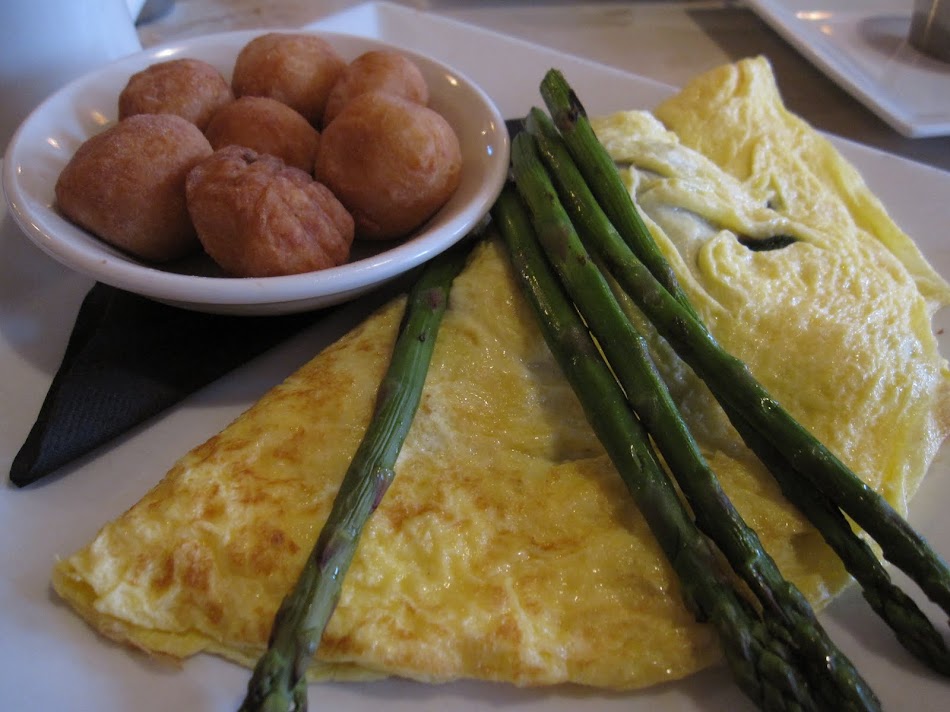 The tater tots came in a small bowl, which was perfect for keeping the ketchup on the tots and away from your omelette. I wasn't wild about the tater tots. Next time I'd try a different side.

At my insistence, we also ordered a side of French toast. I saw it going by on its way to another table and knew we had to at least taste it. The side order comes with just two pieces, which was perfect for us. It was covered in whipped cream and we drenched it in maple syrup. This French toast was pure heaven. This is a must-order item. 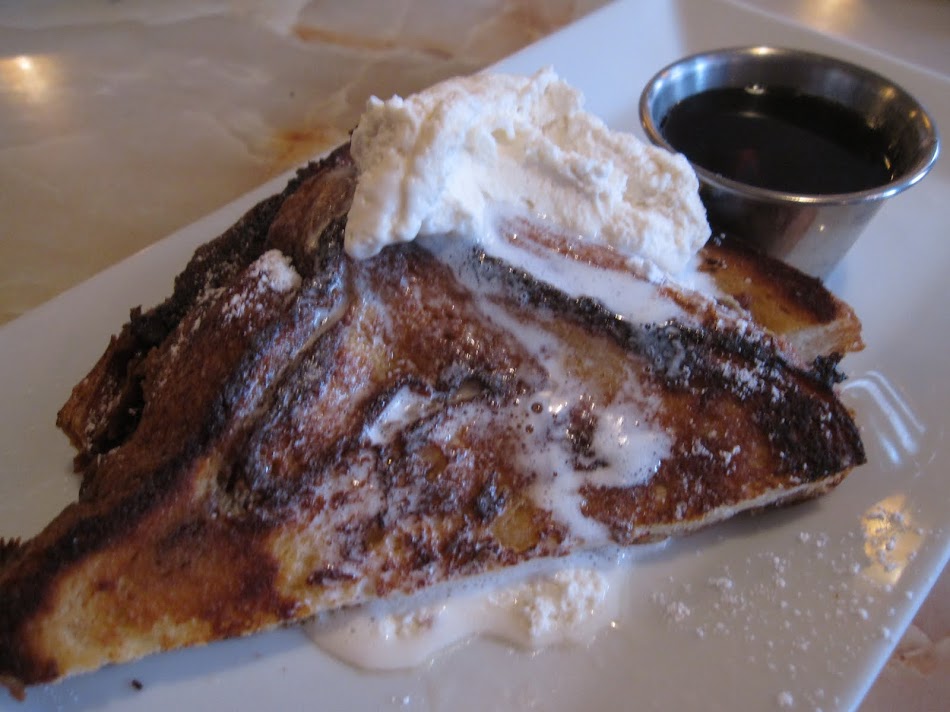 In addition to our food we had bottomless coffee and tea. The waitress refilled my friend's coffee mug faster than your water glass gets filled at a Chinese restaurant. I got to choose from a huge selection of herbal tea and twice she brought me more hot water. 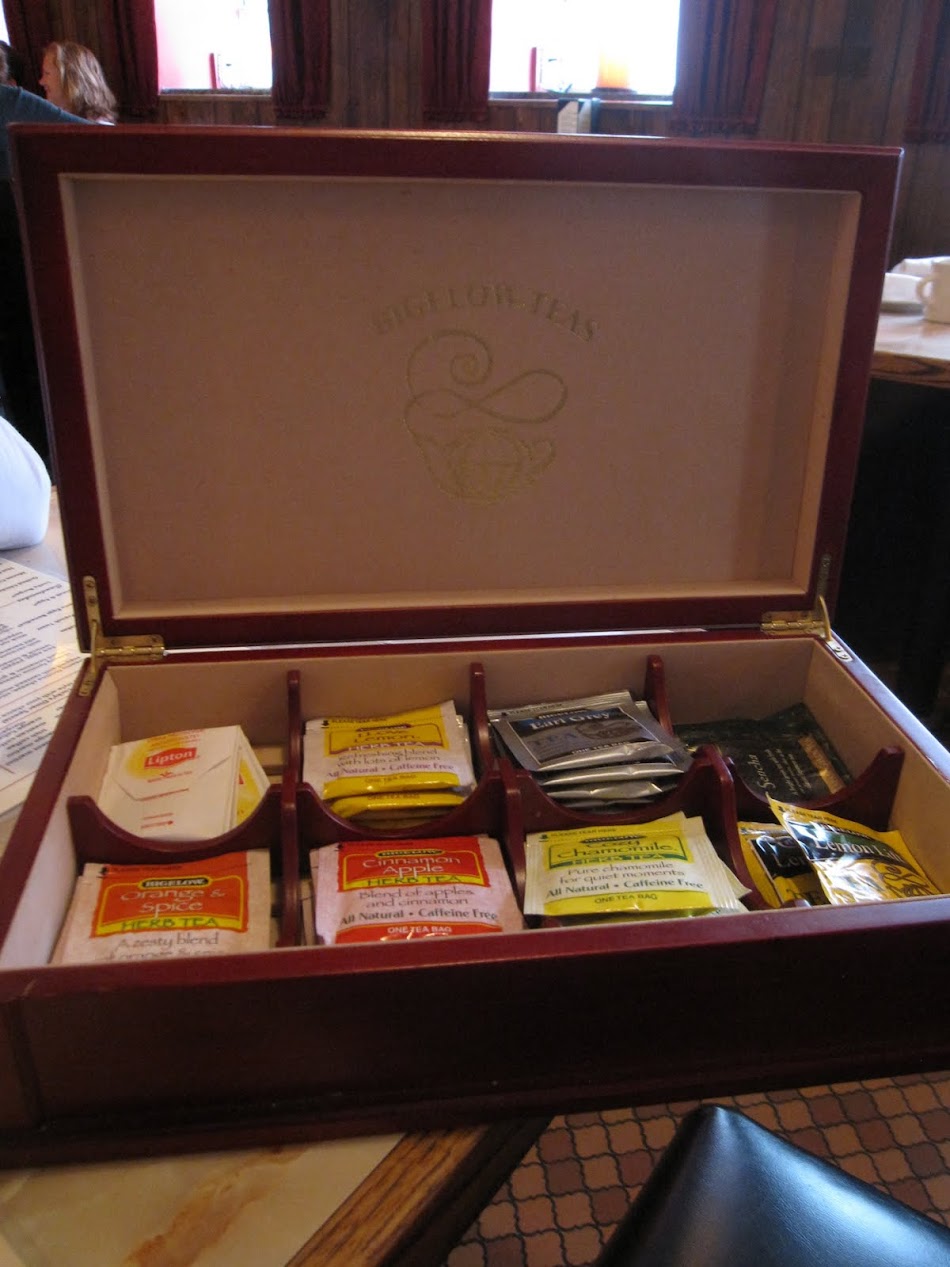 In the middle of our gossip session one of the waitresses joined the band and sang a number! She was awesome! She had a great voice and she was snapping along, tapping her foot and charming the audience. I absolutely loved it! 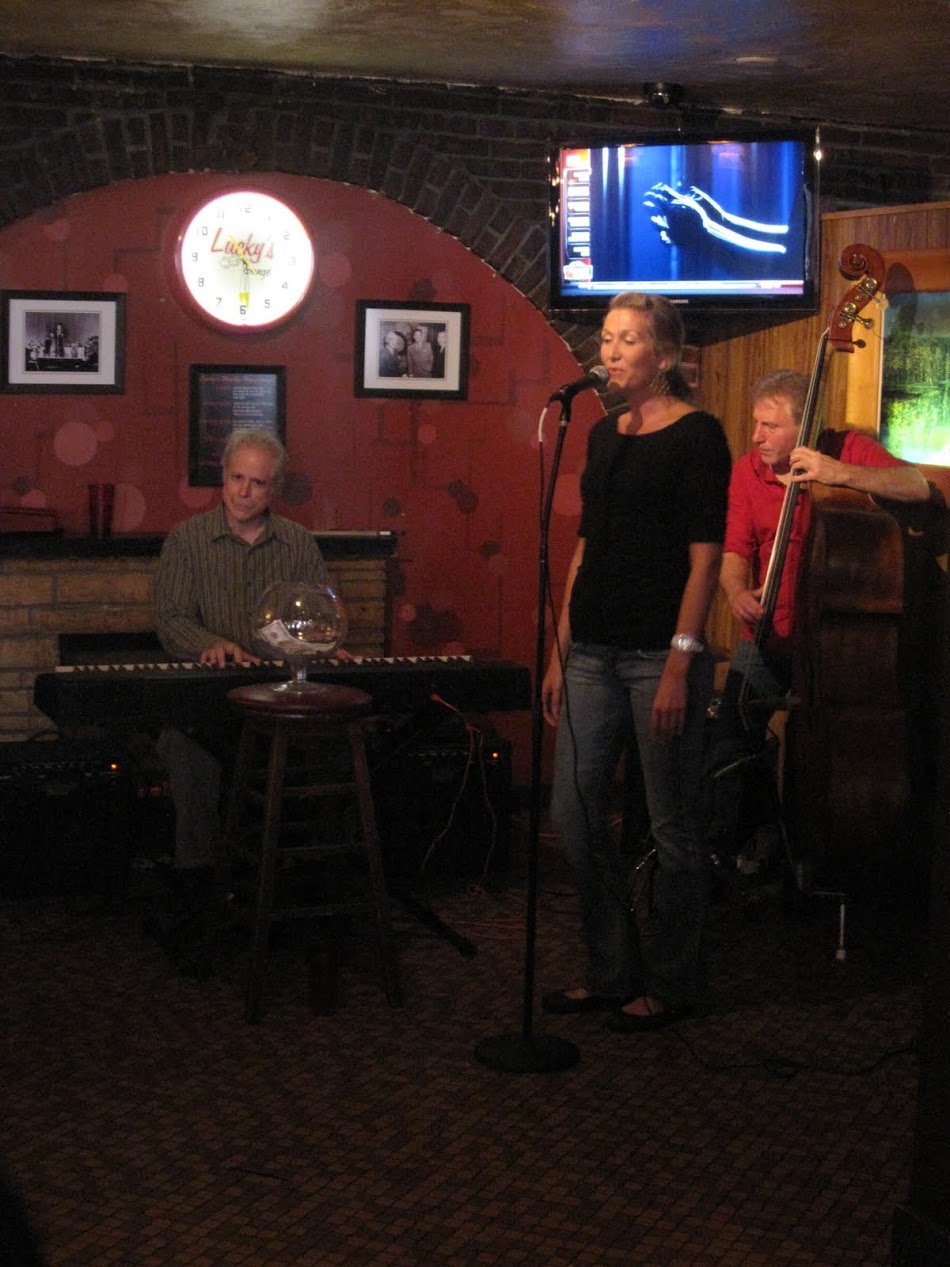 The best part of the entire brunch is that our waitress didn't try to run us out. In fact, she encouraged us to sit and enjoy the music. How nice is that?

I cannot wait to return to Lucky's Lounge for another Sunday Sinatra brunch. I told my parents all about it and they were so jealous that they demanded I make us a reservation there when they come to town in October. 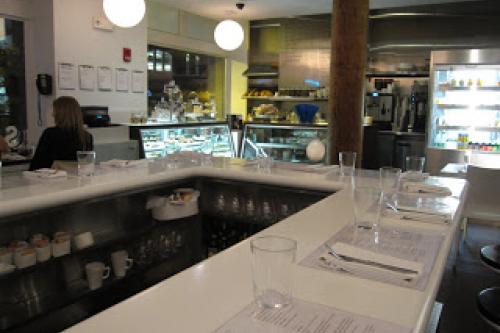 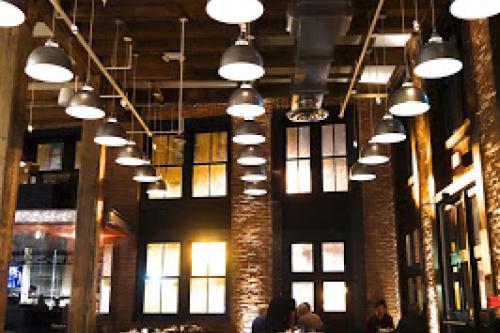 There are few things in this world I love more than trying a new restaurant. A few months ago I began reading about a new venture from the team behind Island Creek Oyster Bar. It would be called Row 34 and be located in the increasingly hot neighborhood of Fort Point, that strange no man's land between the Financial District and the Seaport. 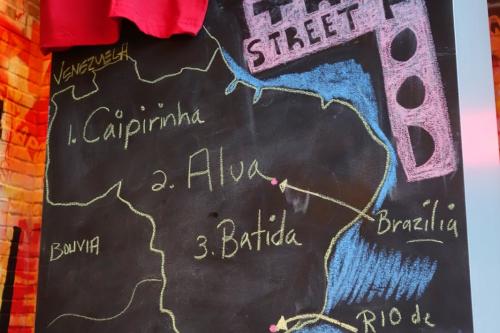 Today marks a very important day for soccer (or should I say football?) fans around the world, it's opening day of the World Cup. Like the Olympics, the World Cup only comes around once every four years. Though professional soccer is definitely not one of the top five sports in the United States, across the globe it's celebrated in countries spanning multiple continents. This year's World Cup is taking place in Brazil. To celebrate that locale, the bartenders of Tavern Road mixed up a cocktail class celebrating the best of Brazil.