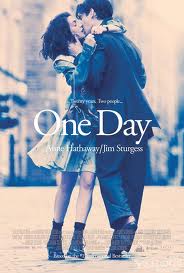 Last night I crossed the river with three girlfriends for a night out in Cambridge. We started in Inman Square at the Irish bar, The Druid. After very satisfying Harpoon UFO Whites, we headed across the square to City Girl Cafe for dinner. We shared a delicious bruschetta with fresh ricotta cheese, juicy tomatoes, basil leaves and balsamic. Three pasta dishes and a panini later, we were off to the Kendall Square Cinema.

We took our seats for the 9:35pm showing of "One Day", starring Anne Hathaway and Jim Sturgess. The film is based on the book by the same name which I read and absolutely loved. This is one of my favorite books of all time. You can read my review here.

When I first heard who would be playing my beloved literary characters on screen I was disappointed. Anne Hathaway seemed too cheeky, not to mention, too American! These characters are not Americans! I also wasn't sure if Jim Sturgess was smoldering enough in that blatant George Clooney or Brad Pitt kind of way, as he's described in the book. This skepticism was compounded by the usual "the movie is never as good as the book" fear. So essentially, my expectations were low, but my love of the book kept me curious enough to pay to see the movie in the theater.

Let me begin by saying, I need a slice of humble pie. I was completely wrong about Jim Sturgess! To me, he was the star of the movie. He was sexy and charismatic but also 100 percent believable as a depressed divorcee and a heart broken widower. I was tremendously impressed. And turned on.

A photo ode to Jim Sturgess as Dexter Mayhew: 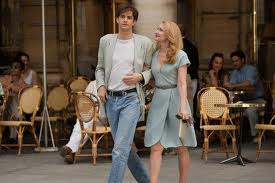 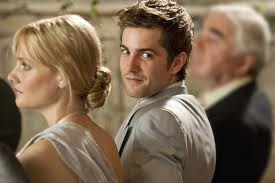 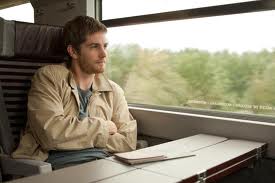 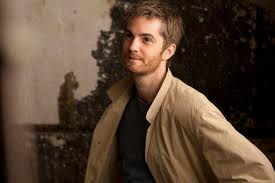 Anne Hathaway was . . . eh as Emma Morley. Her accent was terrible and I didn't believe her passion for Sturgess' character, Dex. 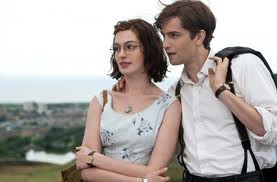 The film moved so swiftly from year to year, that it didn't give the audience (especially people who didn't read the book) time to understand Emma's decade-long yearning for Dex. The writers also cut out the most important scene in the book in Emma and Dex's relationship, their walk through the corn maze at their friend Tilly's wedding. Shame. 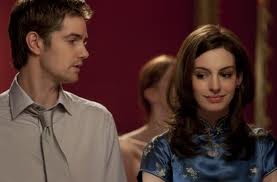 I will say, whoever was in charge of all of Hathaway's hair style changes, bravo! 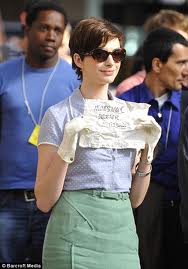 Also, Hathaway rocks a navy, halter dress in the film that is stunning. I want it! 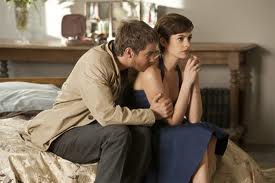 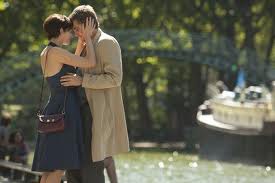 For those who read the book, I thought the actor cast as Ian, Emma's long term boyfriend, was off. He was nerdy instead of awkward, and tall and clumsy instead of heavy set and crude. He served his purpose in the movie, but it didn't seem true to the book.

*SPOILER ALERT!* At the close of the movie, I knew Emma's accident was coming, but I was shocked how brutally they portrayed it. The whole theater gasped out loud and most people covered their eyes. I was not expecting that!

I cried for the last ten minutes of the film. When the lights came up and I tried to talk to my friends about my thoughts, I only cried harder. Bring tissues!

"One Day" was definitely a case of "the movie is never as good as the book" but it was still fun to see and I was happy to get to spend more time with two of my favorite characters. 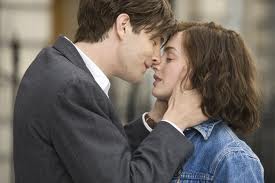 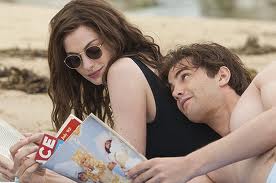 Keep your eyes peeled for two upcoming movies: "Restless" and "The Debt". Trailers for both films were shown last night and they look great. "Restless" is directed by Gus Van Sant ("Milk" and "Good Will Hunting") and stars Mia Wasikowska ("Alice in Wonderland" and "The Kids Are Alright") and Henry Hopper. In the film the two young actors play social outcasts who find love and redemption in one another. "The Debt" stars six actors - three as adults in their sixties and three as their younger counterparts in a series of flashbacks. It's a thriller and my heart was pounding just from the three minute preview! Is there a fall movie you're looking forward to?

END_OF_DOCUMENT_TOKEN_TO_BE_REPLACED

My quest to see all the nominated movies continues with "The Danish Girl." It's well documented here on Pop.Bop.Shop. that Eddie Redmayne is my #1 celebrity crush. I've written about him nine times. Given my devotion, there was no question that I would support him and make sure to see his latest film. *SPOILER ALERT! Do not read on if you do not want to know anything about this movie.* 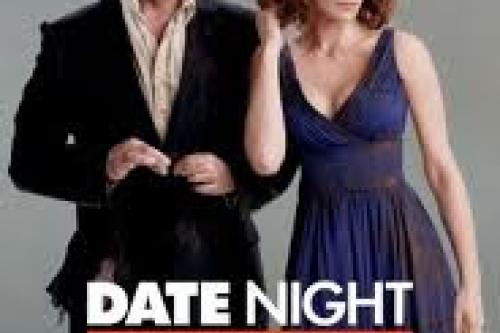 While having a sleep over with my 13 and 10 year old cousins we watched the Tina Fey and Steve Carrell movie,