I have a Restaurant Week tradition with two of my friends that each cycle we choose a place none of us have been to, we wear pearls and we hit the town. Tonight, for the 7th round of our tradition, we decided on Strega on the Waterfront.

We mostly chose Strega for it's waterfront location, but really, you can't go wrong with Italian. This is Strega's second location, it's first is in the North End.

We met at my office at 5:45pm and walked down to the waterfront. I had to stop to take a picture of the harbor on our walk: 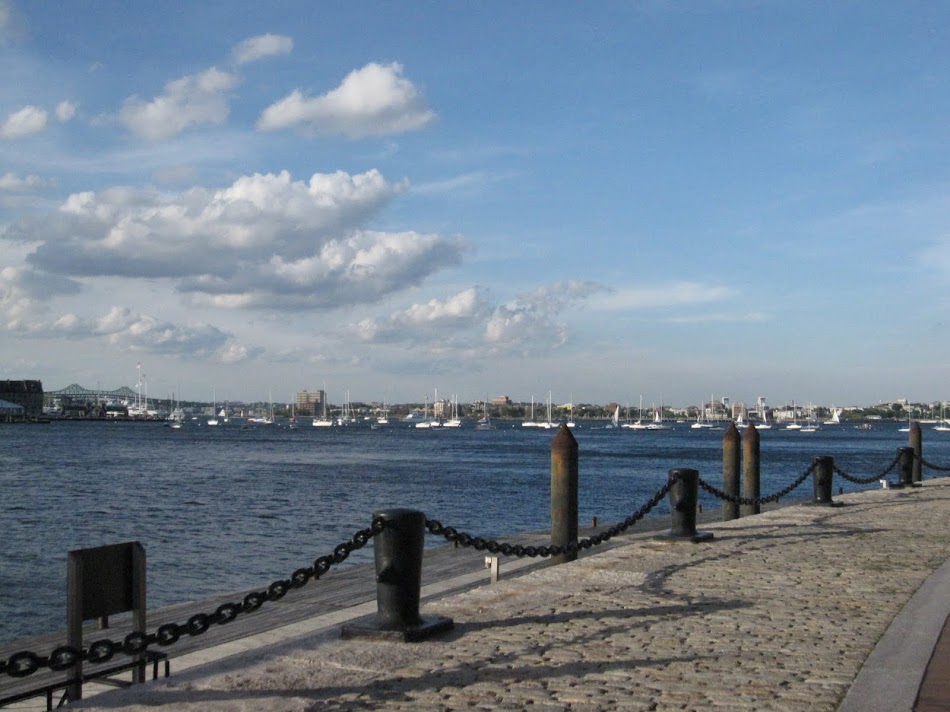 As we approached Strega I noticed this brightly colored sign for the new shops and restaurants on the Fan Pier. 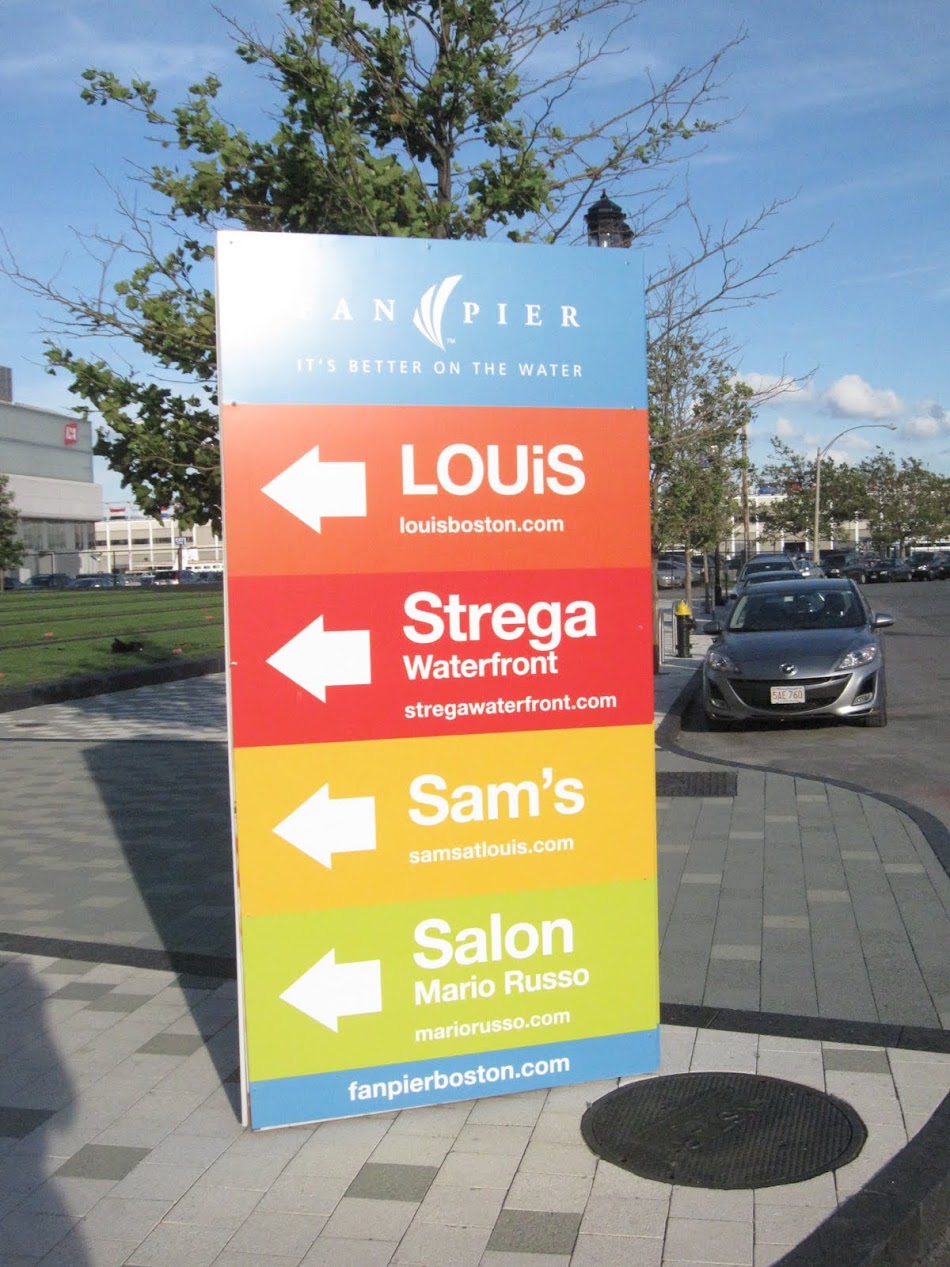 It's funny, I worked in this exact area from 2006 - 2008 and aside from the Seaport Hotel and two dive bars, there was nothing. Now the area is booming.

Strega's exterior is all windows. Why would you want to obstruct those harbor views? 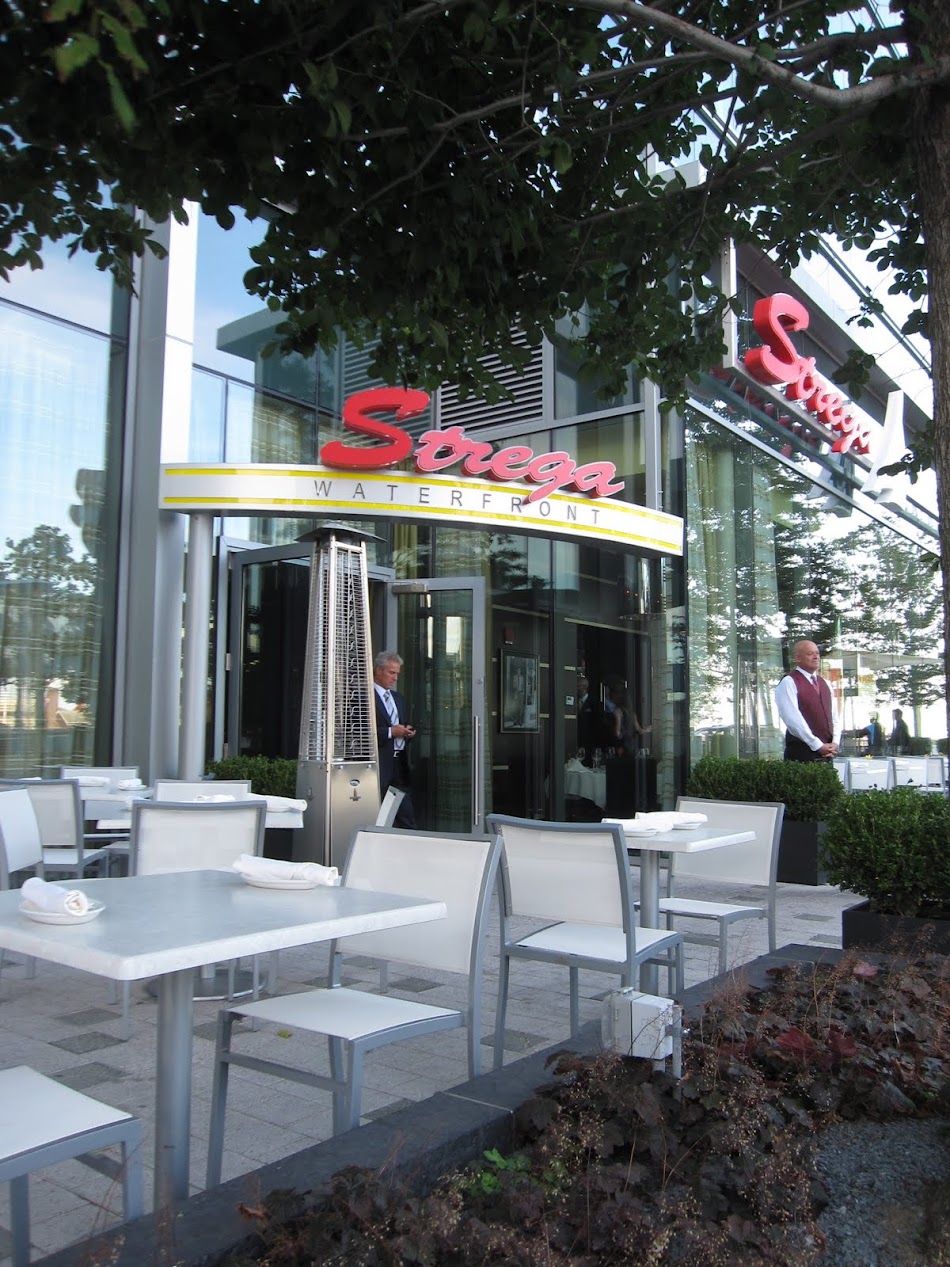 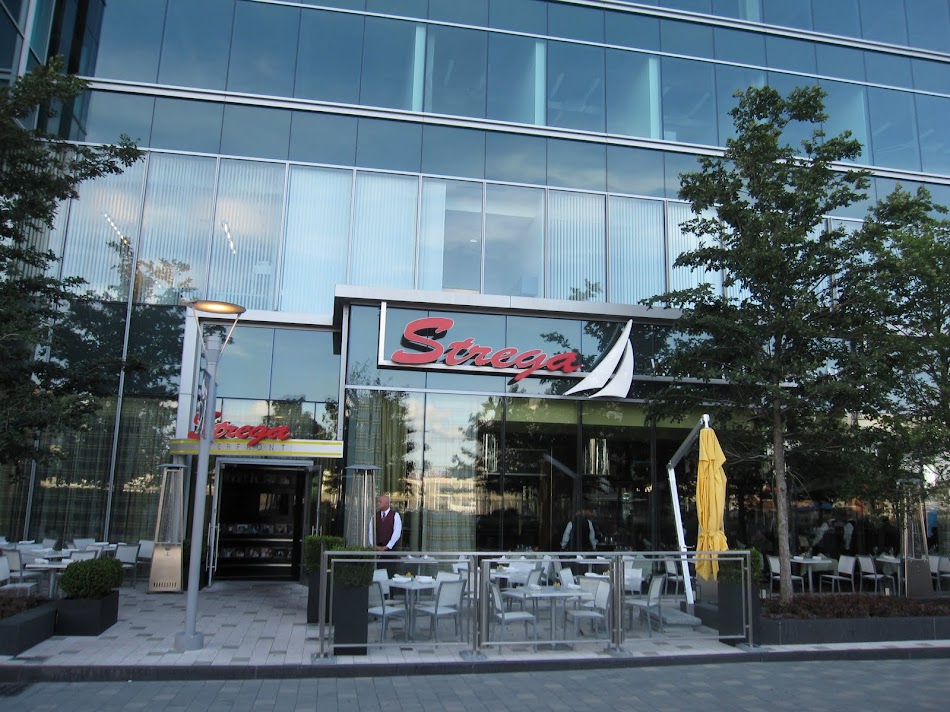 As soon as you step into the doorway, you see a wall of photos of the owner, Nick Varano, with celebrities. I particularly love this one of Nick and a young Mark Whalberg. 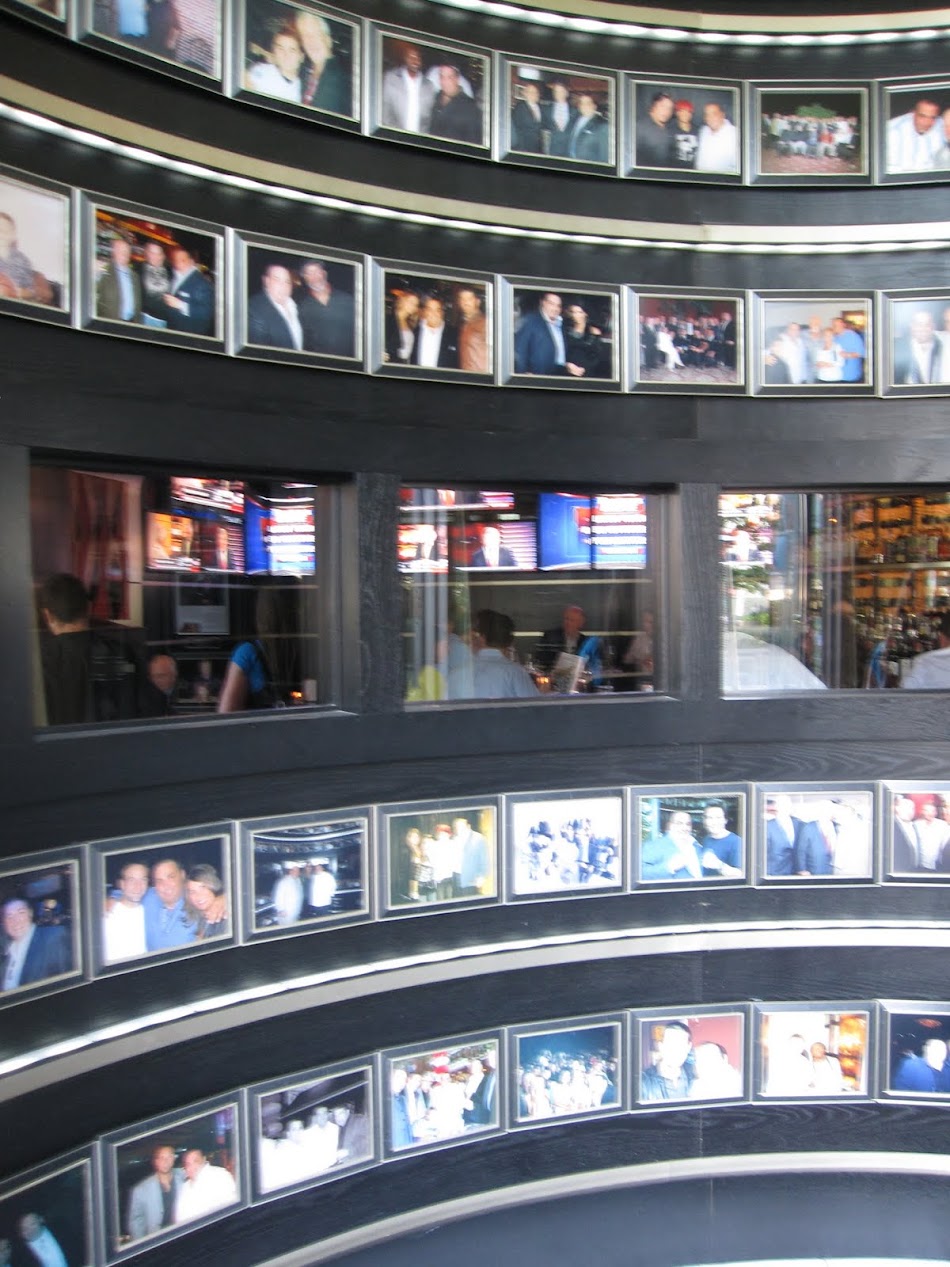 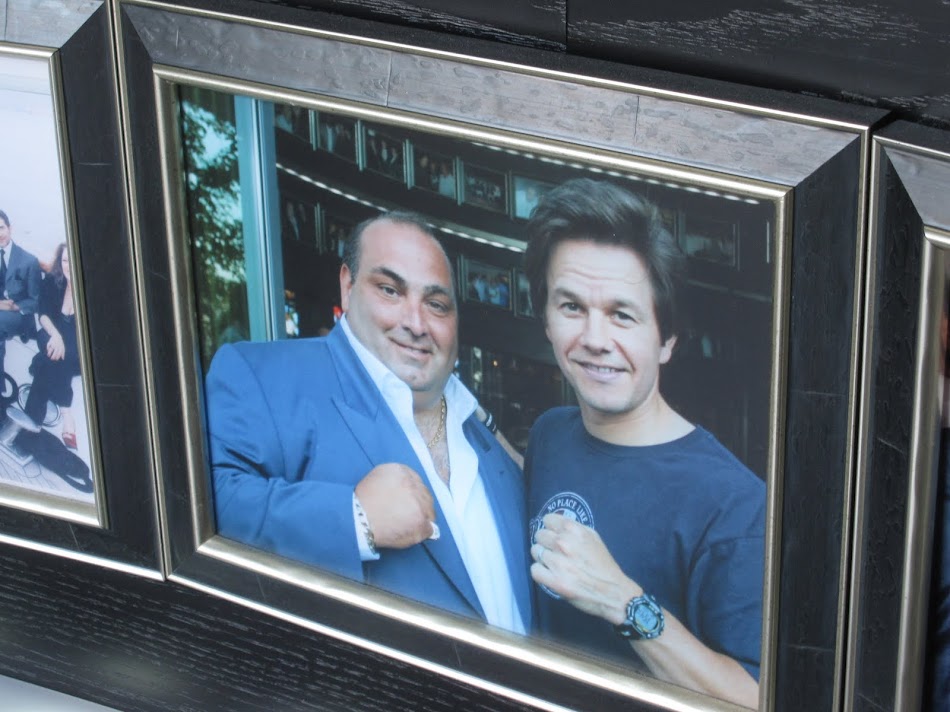 We arrived thirty minutes early for our reservation and decided to have a drink in the bar. The bar area is absolutely gorgeous. We were imagining how bustling it must be on a Saturday night. 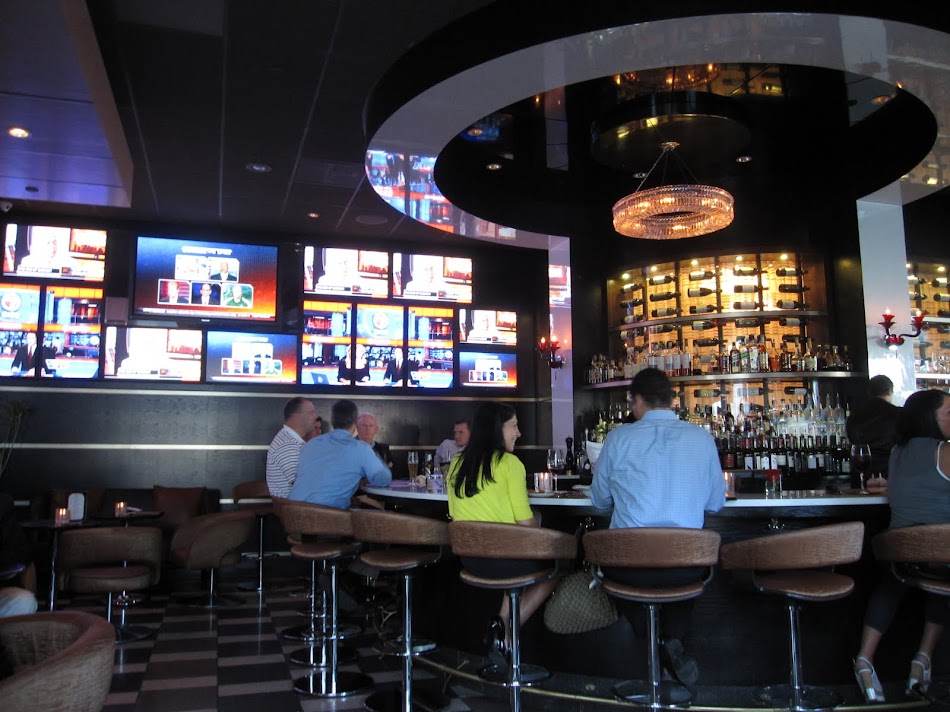 Our waitress convinced us to try the special cocktail, prosecco with muddled strawberries. Sounds delicious, tasted disgusting. It was difficult for me to finish it. One friend decided to order the limoncello, which she said tasted like, "when I used to take six shots before going out for the night in college." Well then! 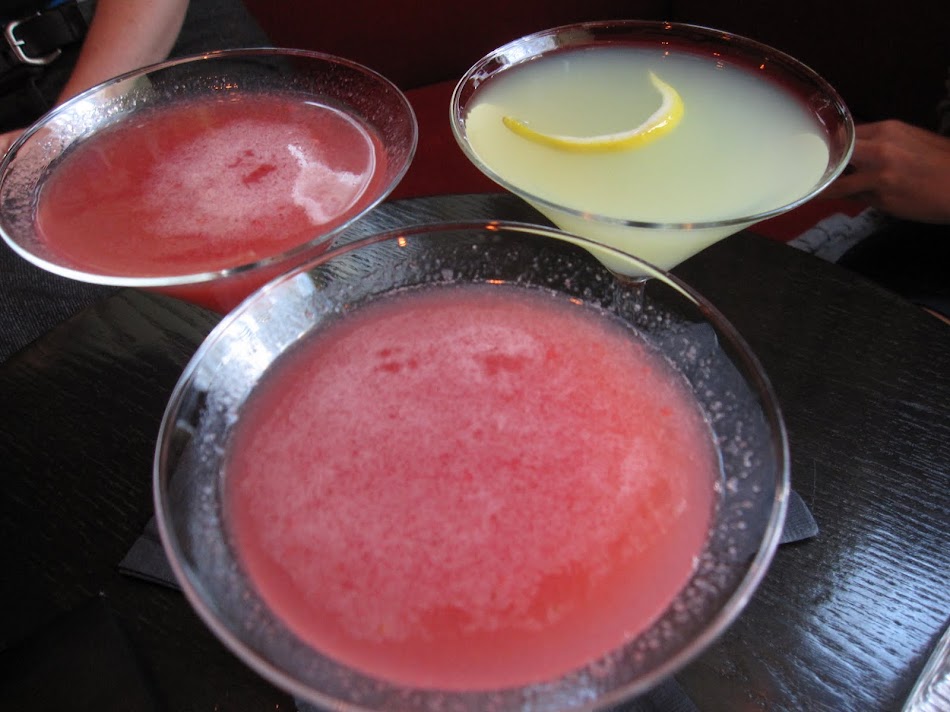 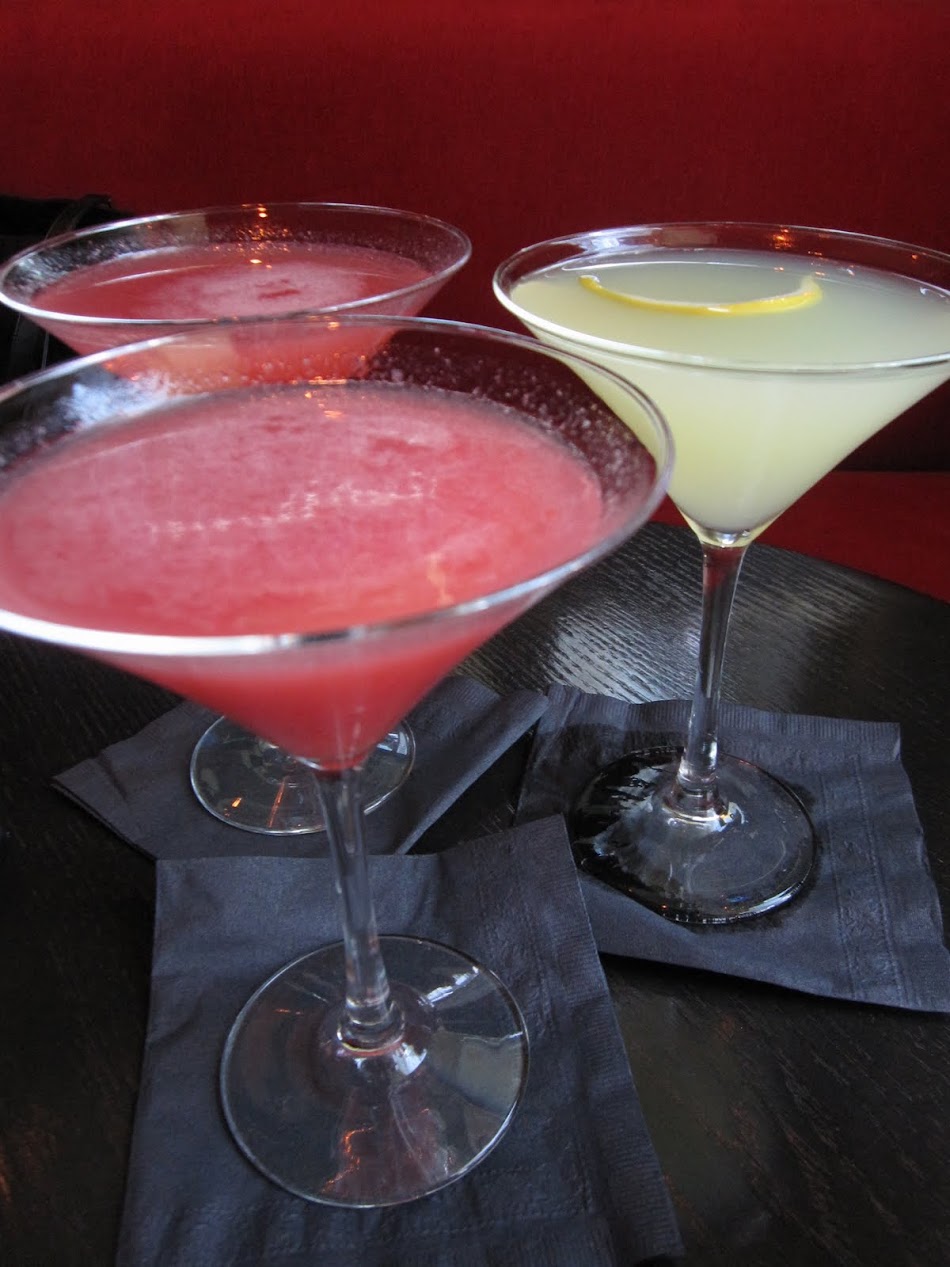 When the clock struck 6:30pm we headed to the hostess stand and she escorted us to a beautiful table, right in the front window. From our table we could see the entire restaurant, as well as the harbor outside. We had originally planned to sit on the patio, but it was just too windy. 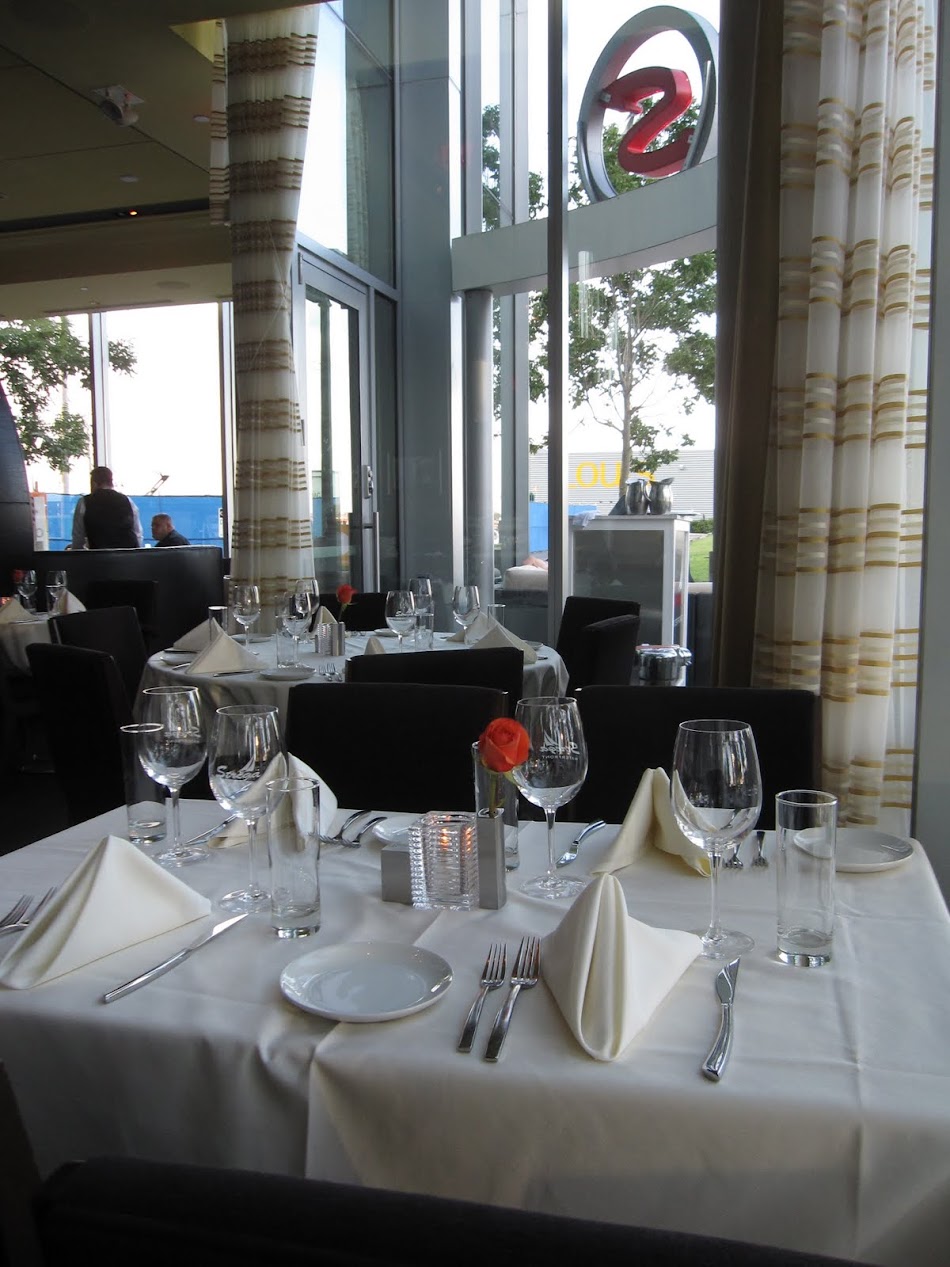 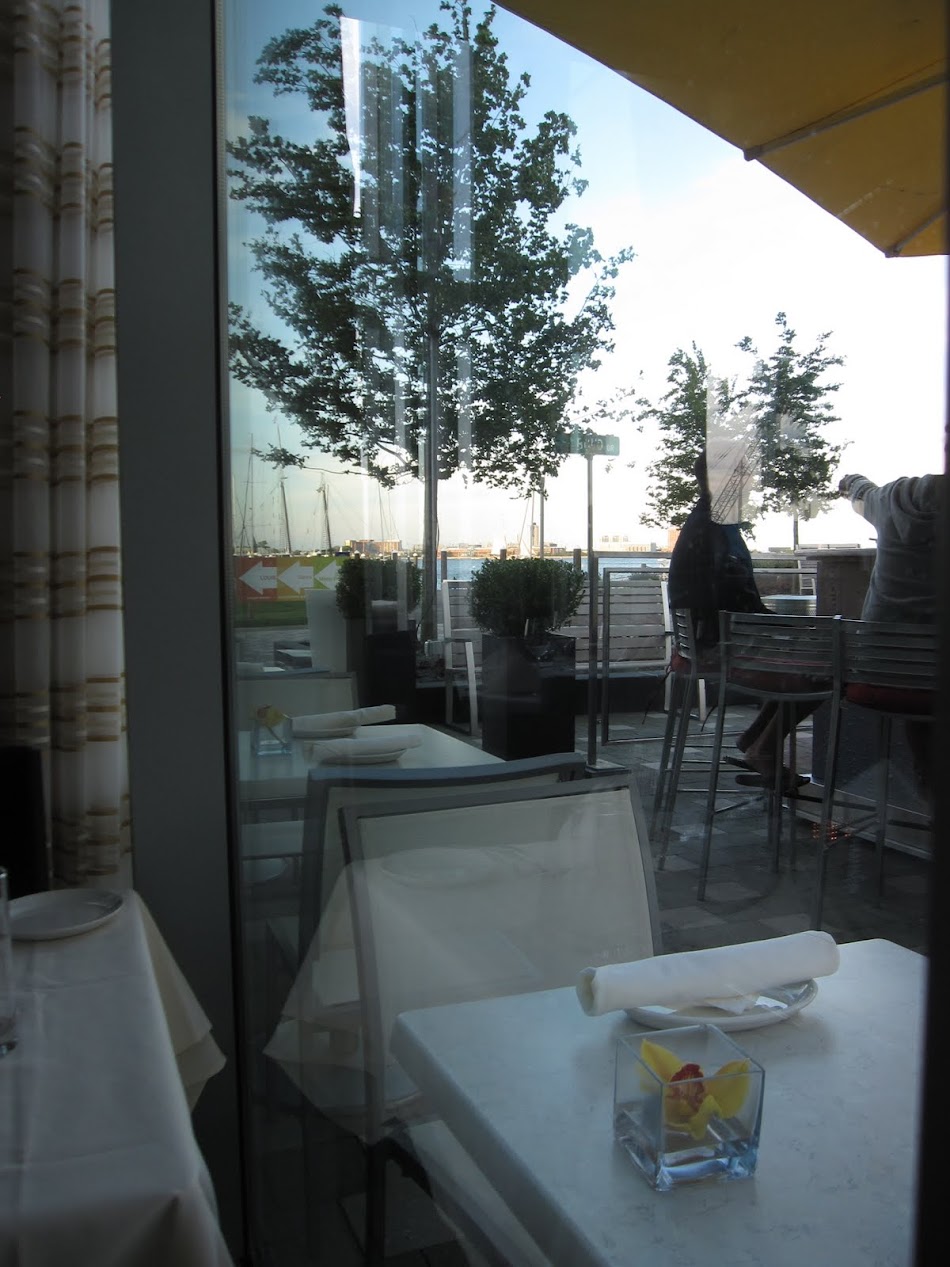 To start, our waiter delivered us a basket of bread (doughy center, hearty crust) with authentic Italian olive oil, olives and garlic. 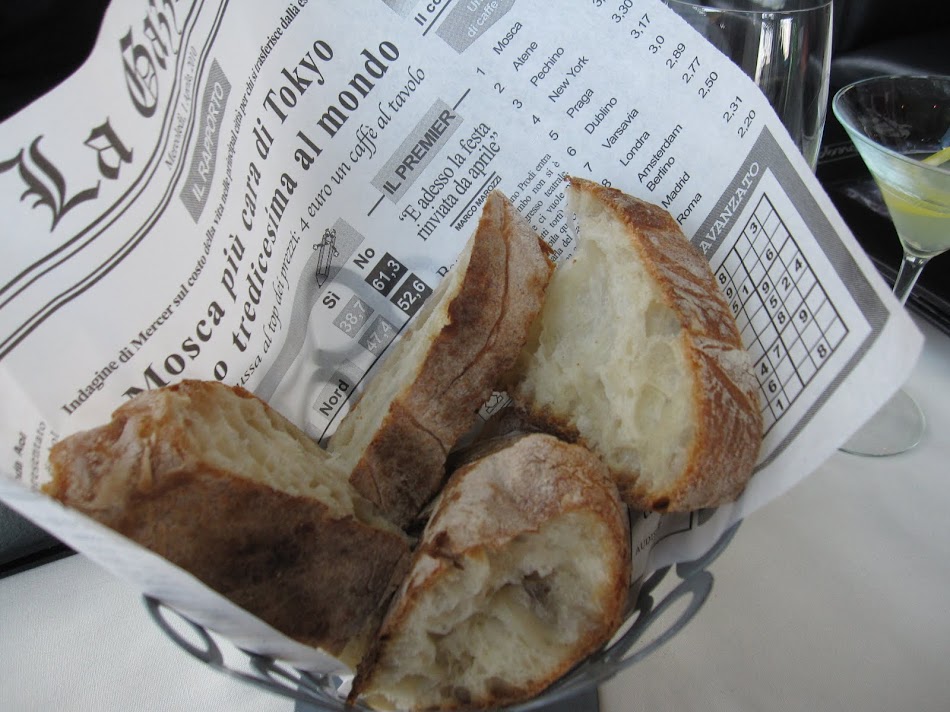 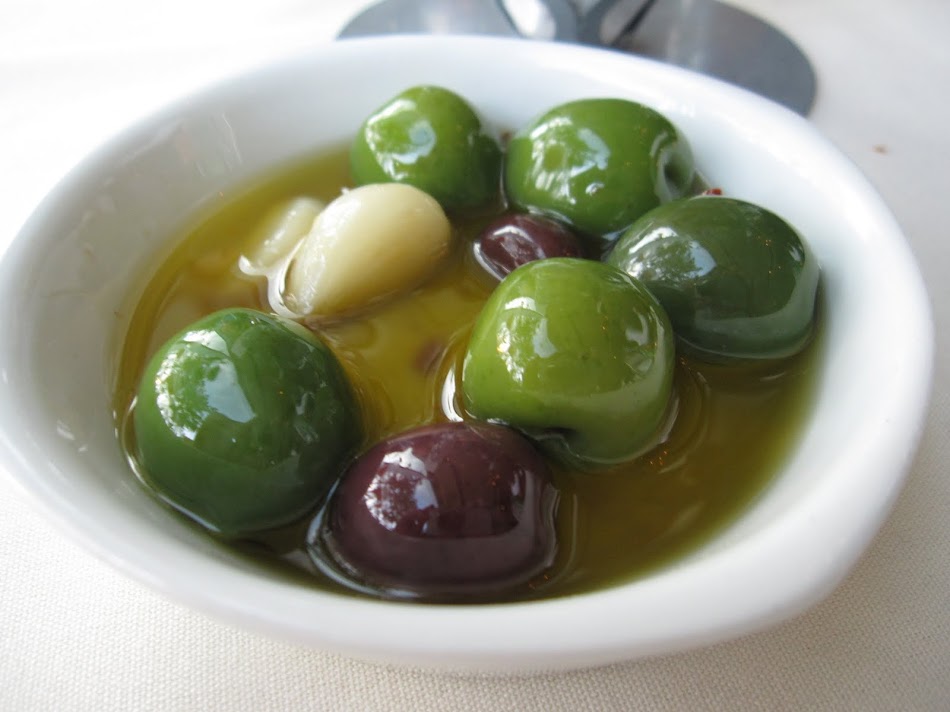 For the first course we split the rollatini di nico which was rolled eggplant, ricotta, spinach, mushrooms, and mozzarella baked with tomatoes and parmesan cheese. This dish was exceptional. I said, "if I had an Italian grandmother, I imagine this is what her cooking would taste like." Molto bene! 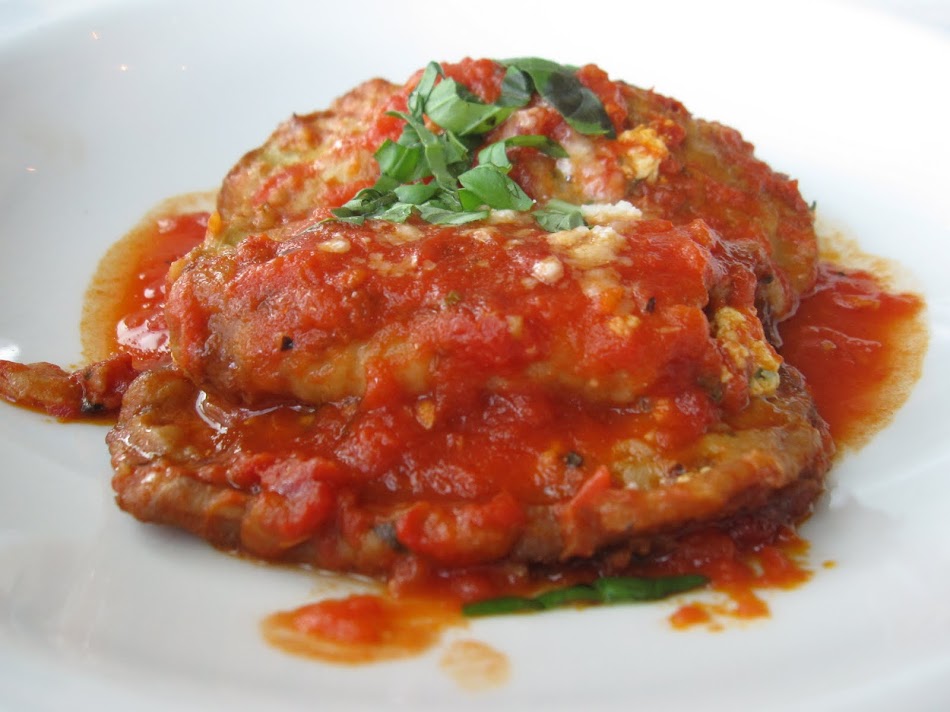 We also ordered the la strega salad which was arugula, grapefruit, parmesan cheese and walnuts. The arugula was fresh, the grapefruit was tart and juicy and the parmesan was just sliced off the block. 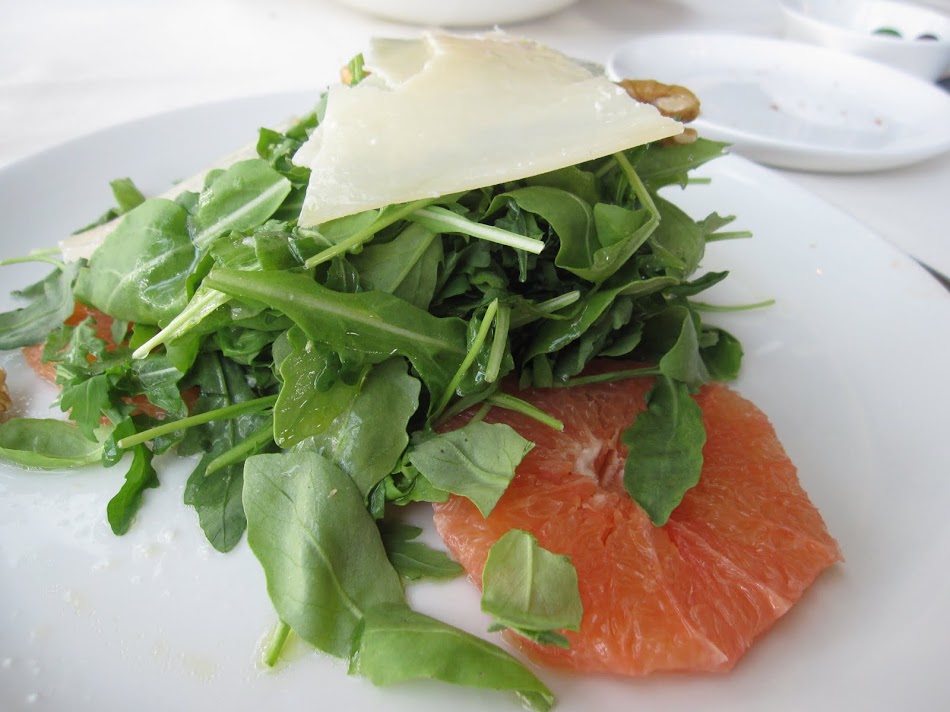 For dinner, one of the girls ordered the weekly, Wednesday night special - the lobster mac and cheese. I had a bite (without lobster) and I must say, it was unbelievable. In addition to baked cheese crust, yummy pasta and creamy, cheese sauce, you could taste the lobster even when there wasn't a piece of lobster meat on the fork. It was truly baked into the dish. We all agreed it was one of the best mac and cheese dishes we'd ever had the pleasure of devouring. 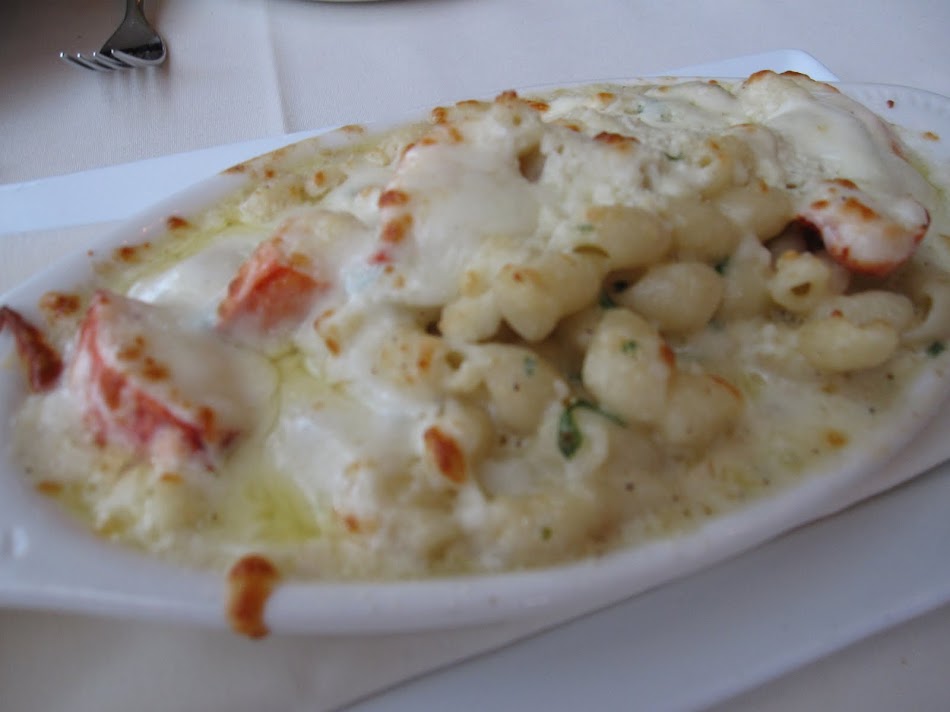 My other dinner date ordered the casarecci di marina which is fusili pasta with sun-dried tomatoes, eggplant and mozzarella in a tomato sauce. She said the sun dried tomatoes cut through the typical tomato sauce and cheese to provide a bold, flavorful bite. 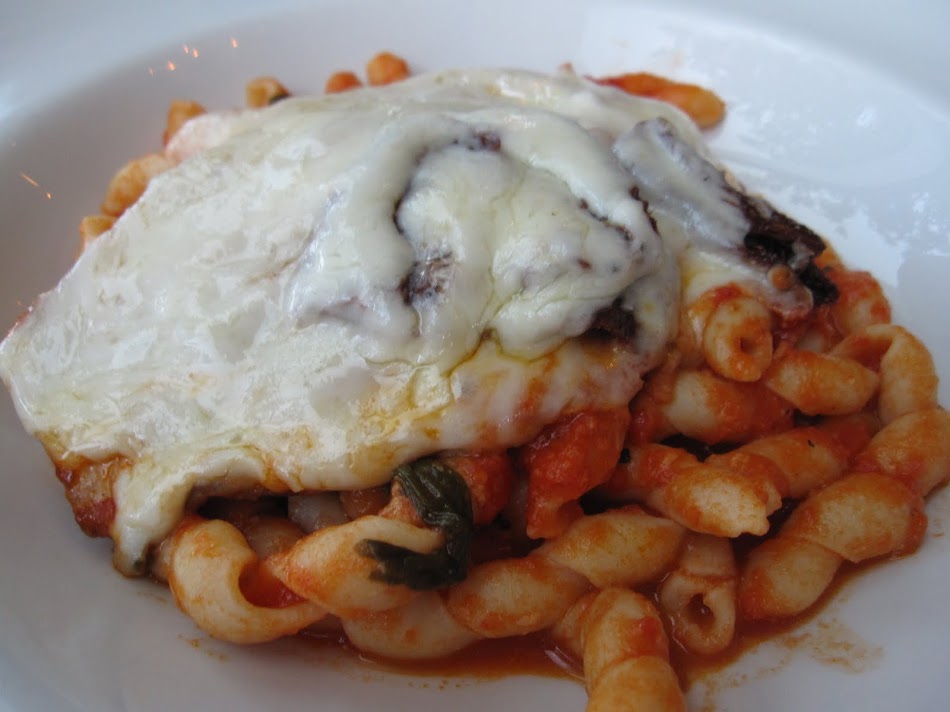 I ordered the gnocchi sorrentina which was traditional gnocchi in a tomato sauce with mozzarella cheese. This portion size was enormous! The dish was lovely, but not extraordinary. If I visited the restaurant again, I would try something else. 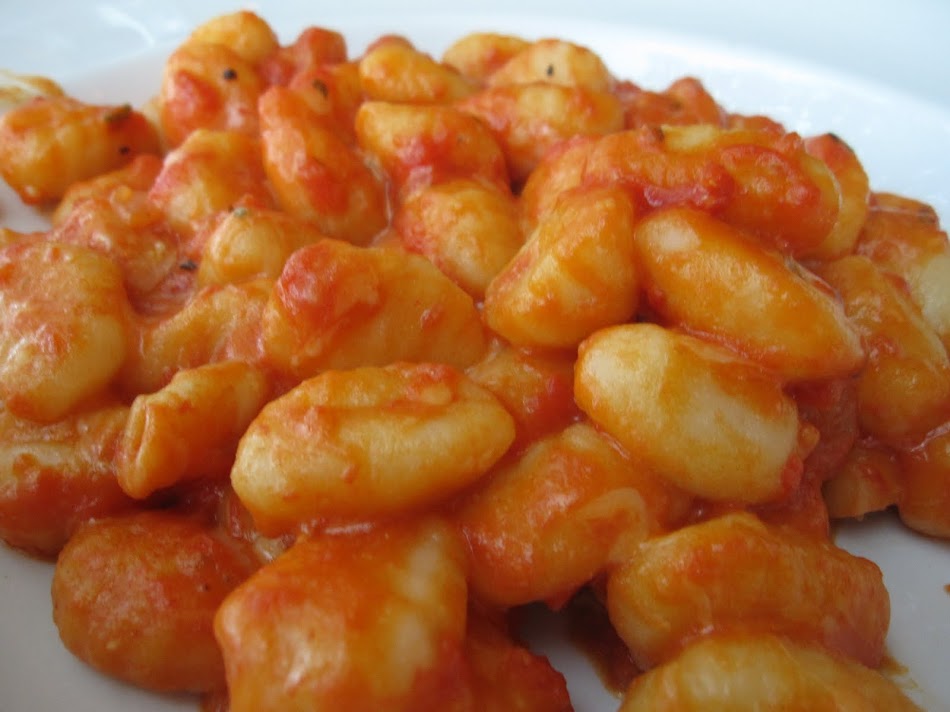 The ladies decided to follow their cocktails with a glass of wine, which came in branded, Strega glasses. 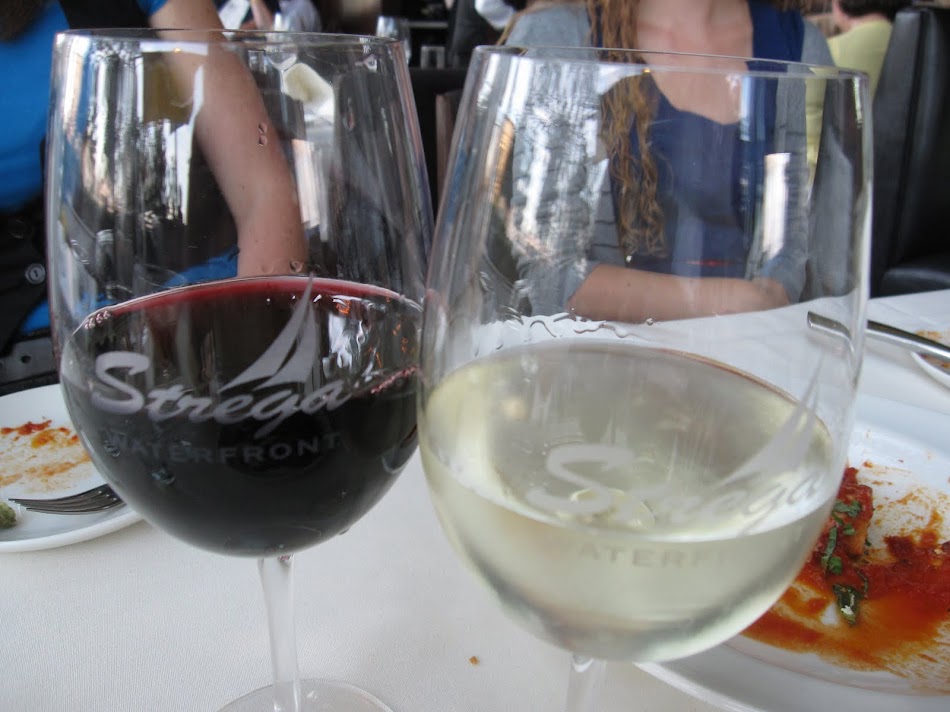 When our waiter returned to clear our plates he asked if we'd be interested in dessert. We wanted to hear the options which he happily recited for us: tiramisu, ricotta pie and chocolate cake, just to name few. We were entirely too full, but good to know for next time.

I was super impressed by Strega on the Waterfront. The restaurant itself is beautiful, the staff is friendly and attentive, the food is wonderful and the view is to die for. I am already looking forward to my next trip!

*Note: At around 2:00pm today we discovered that Strega is only doing Restaurant Week for lunch. We were so looking forward to checking it out, we decided to go anyway.

As I was reading I was like - wait, why are they not ordering off the RW menu! haha. I'd love to check this place out and the biggest takeaway from your review is not to order cocktails. noted. but with a bar like that, they should really step up their game! 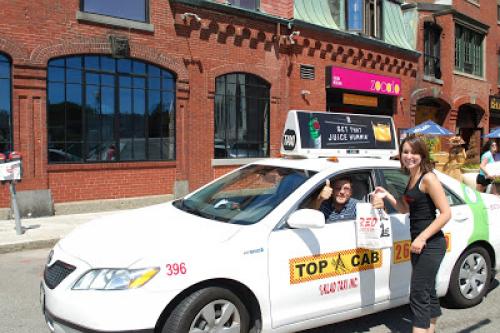 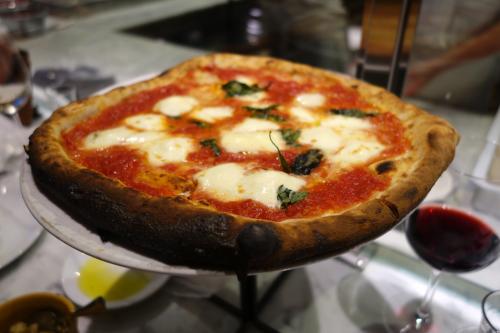 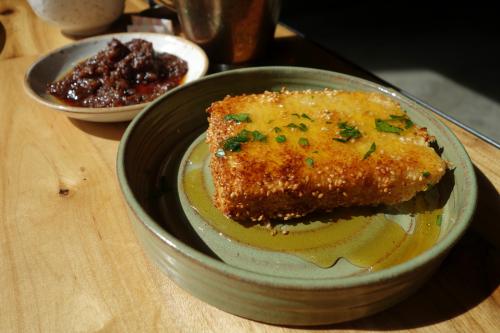