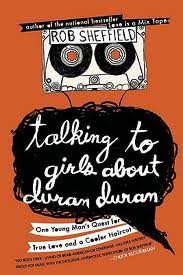 Back in September 2009 I read Rolling Stone writer Rob Sheffield's first book "Love is a Mix Tape" (read the review here). When I learned he was penning a second book, I couldn't wait to get my hands on it. I even pre-ordered the book from Amazon!

"Talking to Girls about Duran Duran" is organized into chapters where each chapter focuses on Sheffield's memories associated with one specific song. The chapter names include a song, the artist and the year the song debuted. One of my favorite excerpts is in the chapter titled "David Bowie, 'Ashes to Ashes' 1980." Sheffield writes:

"David Bowie ended life as I knew it one Sunday morning, entering my life the way a true prophet should -- over a bowl of Fruity Pebbles." I laughed out loud as I read this line on the 57 bus on the way into work. He goes on to say, "It was the beginning of a great teen romance. My relationship with Bowie was a quintessential junior high school relationship, with the caveat that he knew nothing about it. I kept breaking up with him, staging tearful reunions, having worrisome fits over 'Where is this headed?' and 'Do we have anything in common?' often renouncing him entirely and vowing to listen to nothing except hard-core punk or folk music or whatever was turning my head that week, only to realize there was no getting away from Bowie. It was like trying to break up with the color orange, or Wednesday, or silent e. It was the most passionate and tumultuous relationship I'd ever known."

I love three specific things about Sheffield's writing: the raw emotion, the conversational tone and his litany of pop culture references.

For example, in one chapter he writes rather humorously about his summer driving an ice cream truck. He shares:

"This was the best job I ever had, even if it meant putting up with little kids all day. I learned a lot about crowd control. Sno-Cones were the toughest. You have to open them for the kid, because they're basically a fat chunk of ice in a plastic bag. Two out of three Sno-Cones get dumped on the ground while the kid is trying to rip them open. I think they must design them that way on purpose. So when you give a kid a Sno-Cone, you better have a back-up handy. After the first Sno-Cone hits the dirt, you have to hustle the new one into their hands pronto. You have a two - or - three second window. They never cry right away. They always stare at the ground in shock, then fast-forward through denial, anger, depression and acceptance before they start to wail. This is the worst thing that's ever happened to them. That Sno-Cone on the sidewalk is the end of innocence, the first lesson that the world is out to nail them, and you do not want to be there when this happens."

I love that Sheffield can relate anything to pop culture. One of my favorite chapters in the book is saturated with "St. Elmo's Fire" references:

"You know the scene at the end of 'St. Elmo's Fire' where everybody's saying goodbye to Rob Lowe at the bus station? Rob Lowe takes Judd Nelson's arm, looks him in the eye and whispers, 'Don't let her go.' Judd hangs his head, because he knows Rob Lowe is right (he always is) and that he needs to old on tight to Ally Sheedy, even if she did just bang Andrew McCarthy in the shower. That's a beautiful moment."

Reading Sheffield's writing is like talking to a friend. A friend who has an encyclopedia-like brain of music and pop culture information. As an added bonus, Sheffield grew up in Milton, MA so he makes many Boston references. On a personal level, my heart melts from his adoration for his sisters: Ann, Tracey and Caroline. As you read about their interactions, you can picture his face turning upward into a smile as he talks about them.

I think the primary reason I have fallen in love with both of Sheffield's books is because his writing style is exactly what I aspire to achieve with my own writing. I felt energized reading both of these books and I hope you will read them and feel the same. Both "Love is a Mix Tape" and "Talking to Girls about Duran Duran" are perfect summer/beach/travel books.

Have you read either book? What did you think?