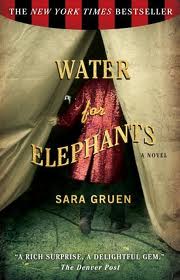 I do my best reading while on vacation. During a typical work week I am so preoccupied and overwhelmed that the concept of "leisure reading" feels like a joke. Reading on vacation allows my the brain space to digest and savor great writing.

On this trip to Miami I decided to read "Water for Elephants" by Sara Gruen. When I went to see the movie "The Adjustment Bureau" a few weeks ago there was a preview from the film version of "Water for Elephants." I had heard great things about the book and became instantly determined to read it before the movie hit theaters April 22nd. Well, mission accomplished!

I read "Water for Elephants" in two days. I couldn't put it down! It was so unlike anything I had read before. The book tells the story of Jacob Jankowski, a young man about to take his final exams in veterinary school, when he learns his parents have both died in a car accident. With no family or home to return to (it gets possessed by the bank), Jacob has to start again in the midst of an extreme tragedy.

On the search for answers, Jacob finds himself aboard a circus train (the story takes place in 1931). The story is as much about Jacob's life with the circus as it is an homage to the history of the circus in depression era America. At times I felt I was reading an incredibly detailed memoir and other times, an engaging history book.

Most of the story is told in flashbacks to Jacob's first year with the circus. However, there are a few chapters that take place in present day when Jacob is ninety three and living in a nursing home. He is prompted to share these stories from his youth when a circus sets up camp outside his nursing home.

Author Sara Gruen is a beautifully descriptive writer. Though I pictured the three main characters as the actors who are going to the play them in the movie (Robert Pattinson, Reese Witherspoon and Christoph Waltz), I could clearly hear, smell, taste and feel everything she described. 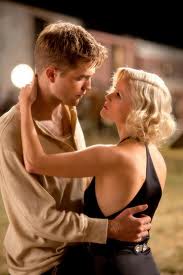 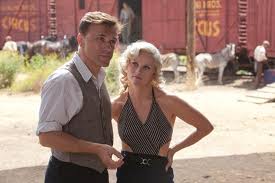 The story is painfully real, both emotionally and physically. Though this is not a happy story, it's impossible to turn away.

As you know, the book is always better than the movie, so be sure to read "Water for Elephants" before you see the film! Also, the newest addition of the paperback includes a fascinating Q&A with the author and book club questions!

Have you read "Water for Elephants"? What did you think?

The movie previews have been captivating. I am so glad you recommended the book because I really want to read it now!

Yes! Definitely read it. I absolutely loved it!

END_OF_DOCUMENT_TOKEN_TO_BE_REPLACED

Read: The Guy Not Taken

A few weeks ago I told you about my new book store discovery,

At my last job I represented a company marketing an e-reader.