Tonight I had dinner with two of my favorite girls at Lolita on Dartmouth Street in Back Bay. I first heard about Lolita on Twitter (@LolitaBoston) and was immediately impressed by their social media efforts. After checking out their website I learned they were opening in the space formerly occupied by Paparazzi and would be serving Mexican food and tequila. Seems like a no brainer, right?

We had called earlier in the week to make a reservation but learned that Lolita only takes reservations for parties of six or more (good for future reference). We arrived tonight at 6:30pm and were seated right away at a table to the right on the bar, on an elevated area with about seven tables.

The decor in the restaurant is stunning. Its mostly black and red with wooden tables and chairs. Our table had a deep, red arrangement of roses with two red tea lights. It was gorgeous. 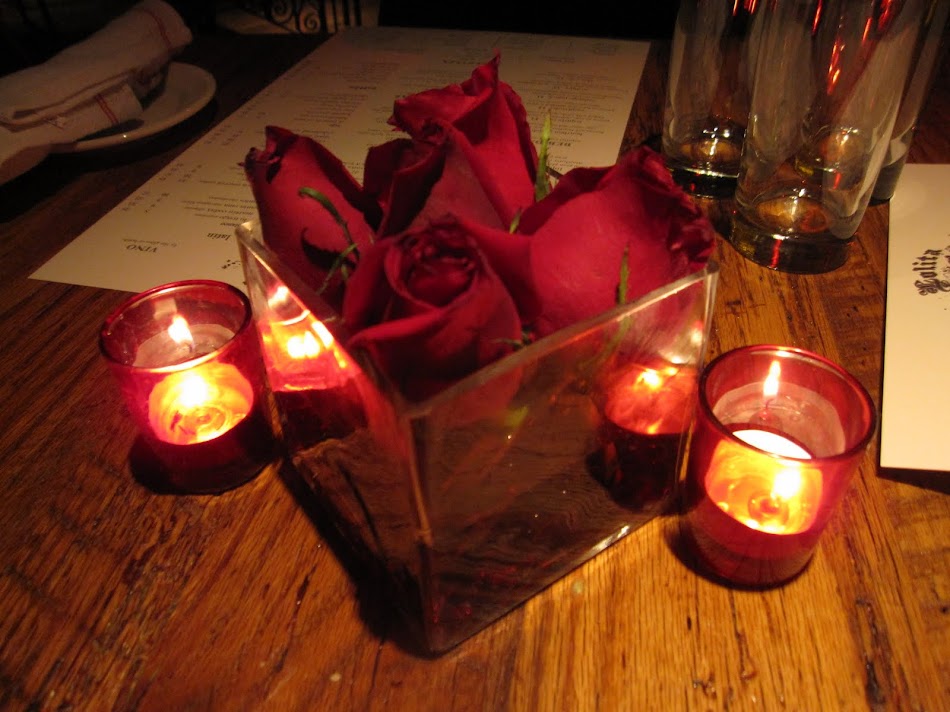 Our waitress came over right away to explain the three menus - the tequila menu, the cocktail menu and the food menu. Check out how large the tequila list is! 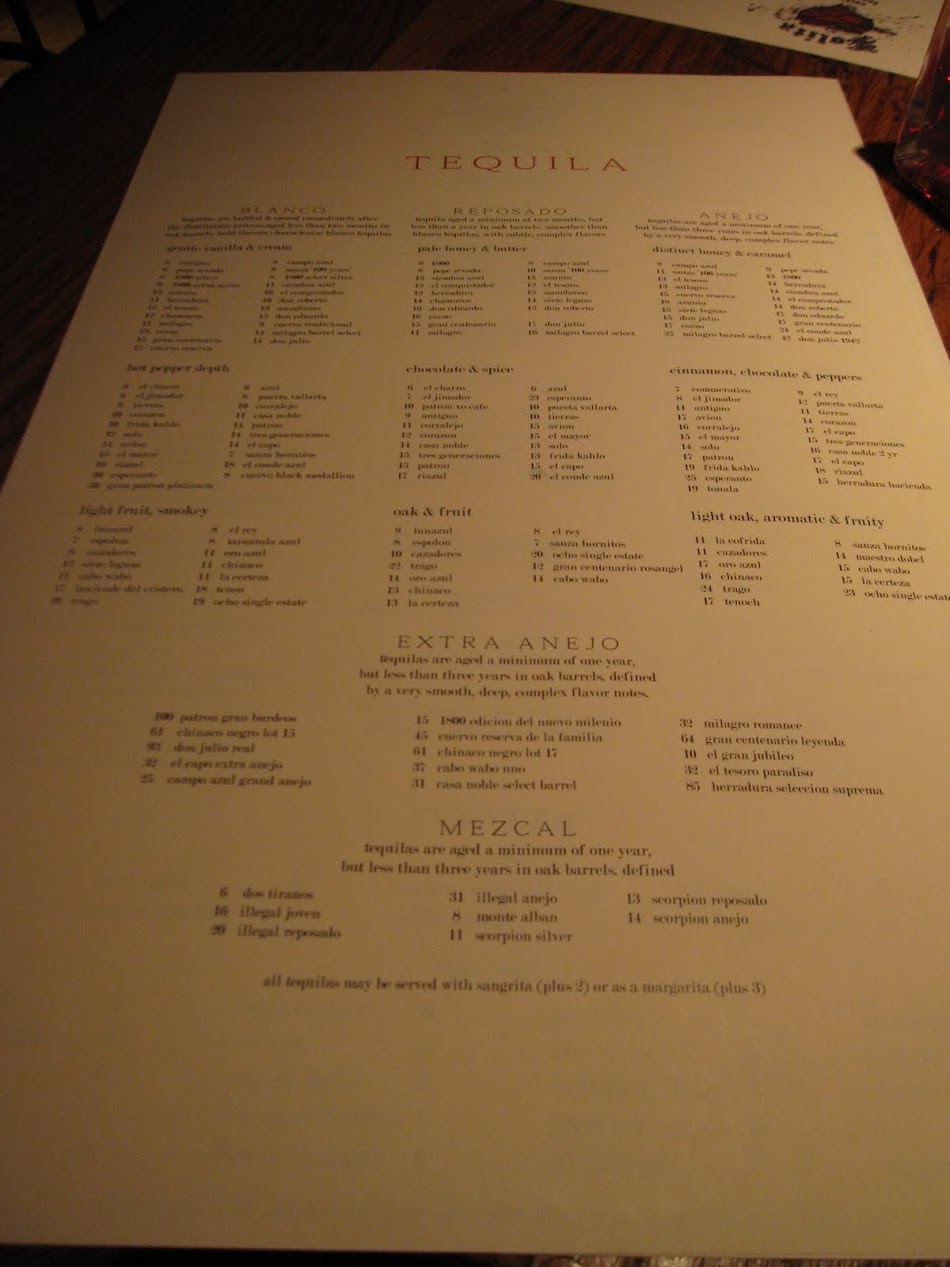 We were a bit distracted by the item she was carrying - a granita over dry ice. As the white cloud billowed over our table she explained the granita is meant to cleanse your palate before the meal. She also offered to pour a complimentary shot of tequila over the granita. Um. Yes please! 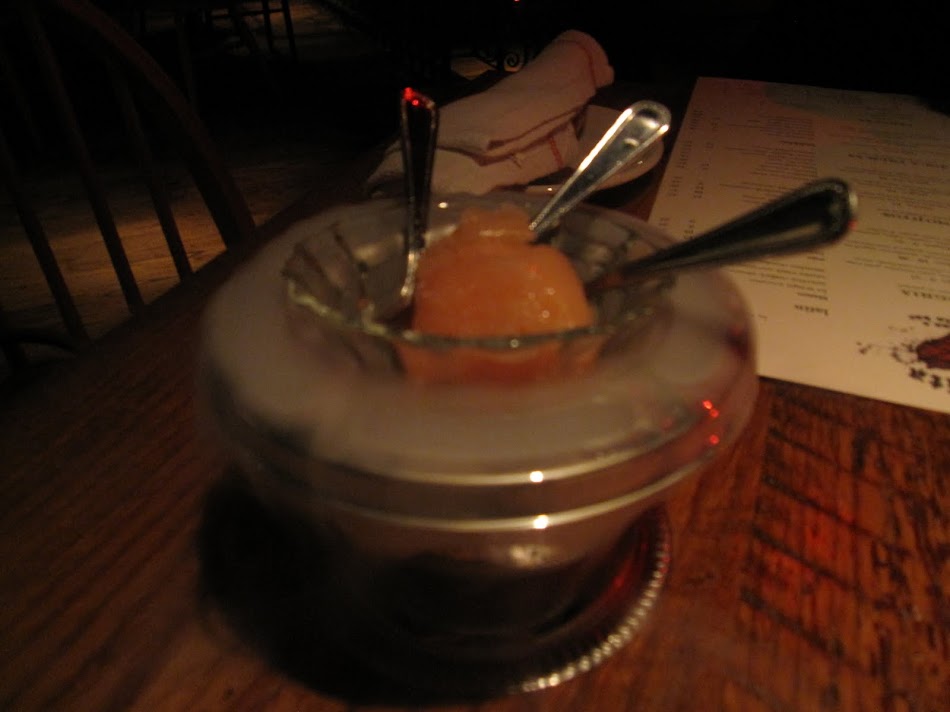 She gave us a few minutes to look over the menus and returned with ice cold water, a basket of tortilla chips and a complimentary trio of salsas. It included a tomatillo salsa, a chipotle cream salsa and a fire roasted tomato salsa. Every single one was delicious! 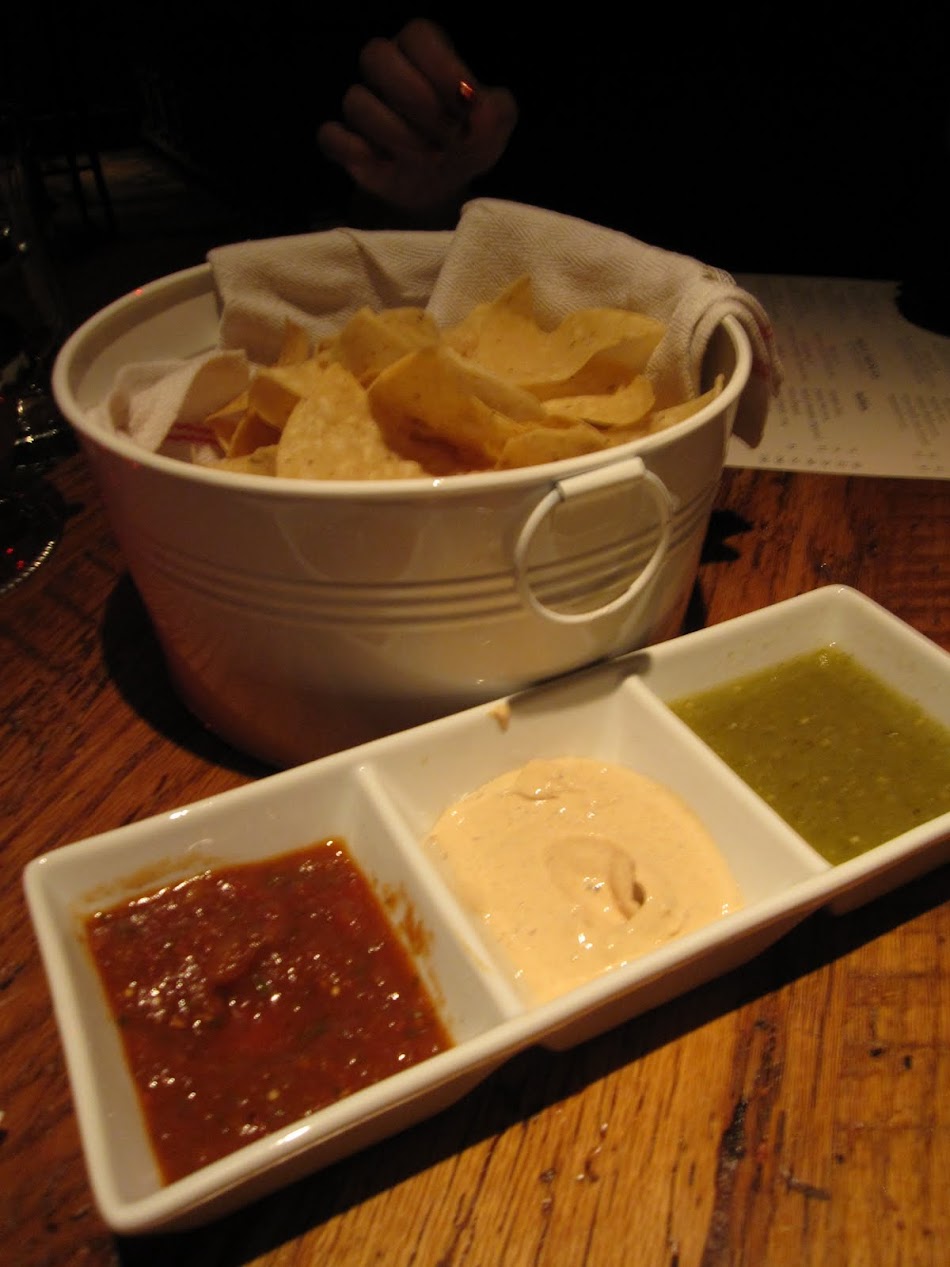 We weren't in the mood for tequila shots (it is a school night after all) but we did try two of the margaritas. We tried the house specialty which is appropriately named the "Lolita." Its a margarita with a splash of grapefruit juice. We also tried the "Broken Heart" which had St. Germain, white grapes and red raspberries. Both drinks were fantastic! 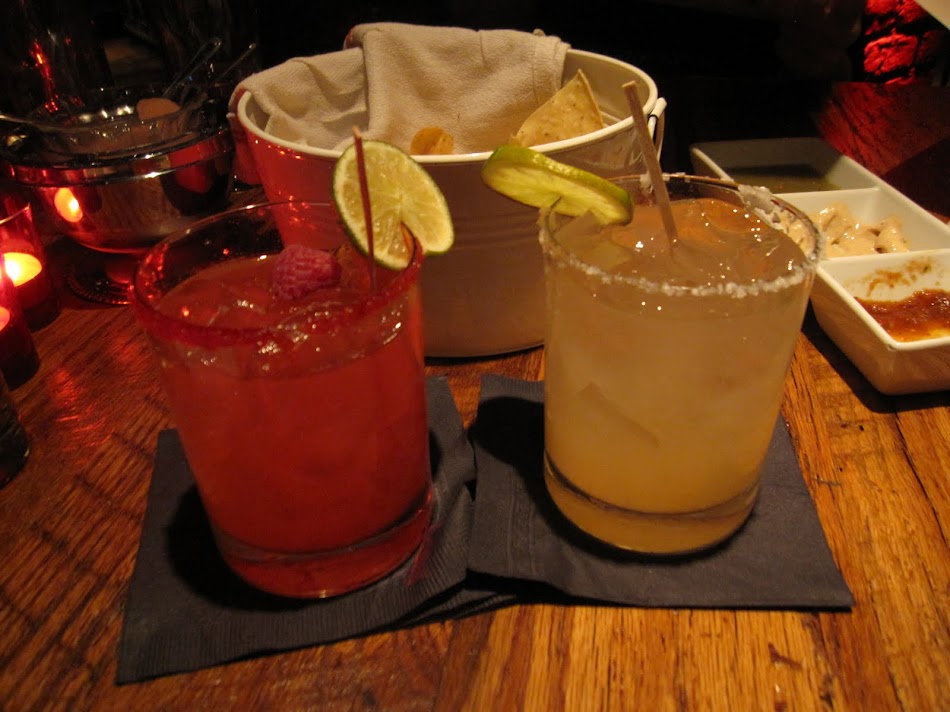 We decided to order an appetizer. The menu includes four types of guacamole and we went with the classic "fresco" option which was excellent! The avocado was fresh and rich and the tomato and cilantro garnishes were the perfect compliment. We devoured it. 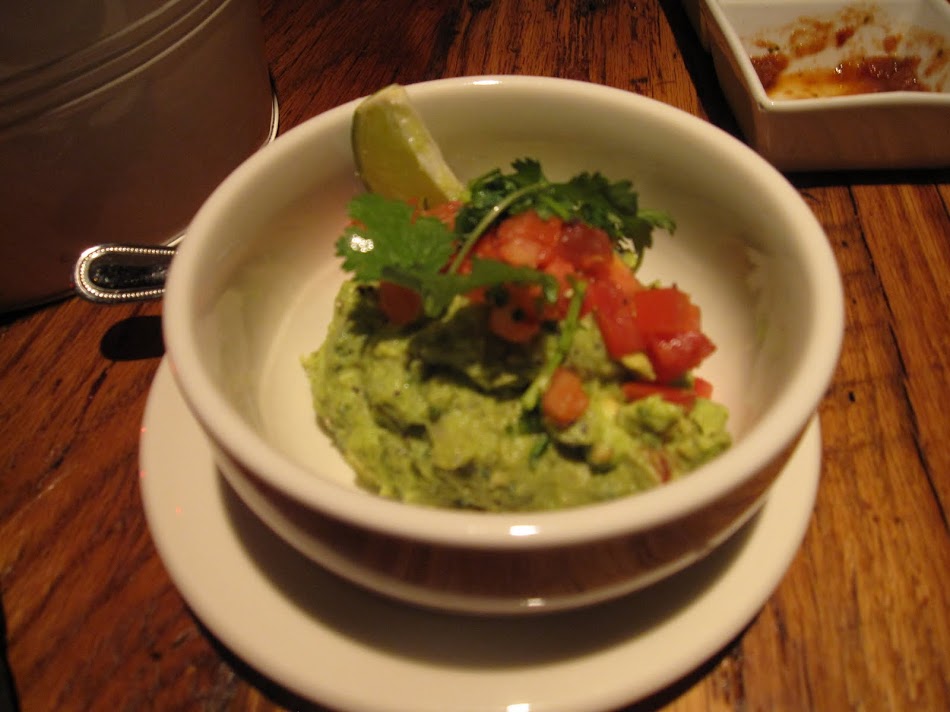 For dinner we ordered a few entrees and a few side dishes. When in Rome, right?

First we ordered the crab and roasted poblano nachos which were a bed of crab meat, cheese, beans, salsa and sour cream with tortilla chip soldiers standing at attention in the center of the bowl. 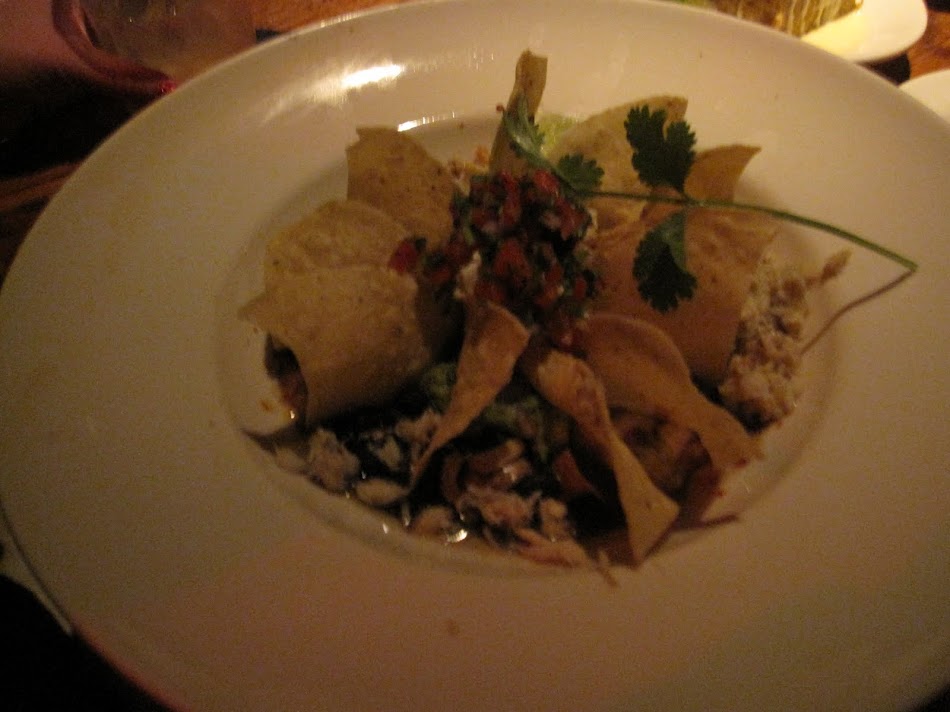 We tried the chicken tacos which were unfortunately a bit dry. 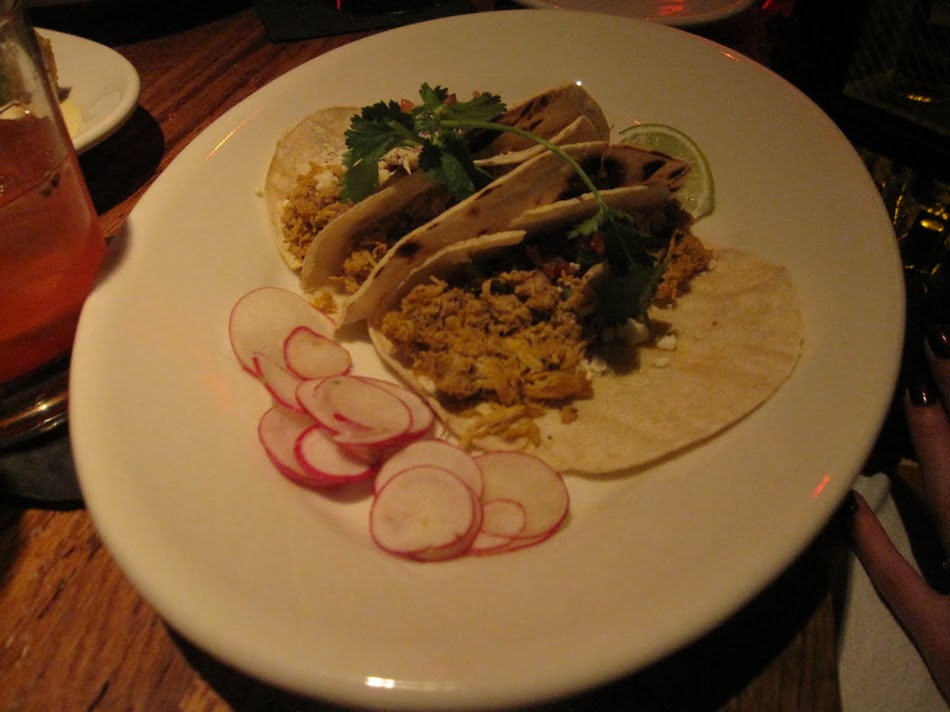 We also ordered the mercado verde enchiladas which were sensational. Great vegetable flavor and piping hot. 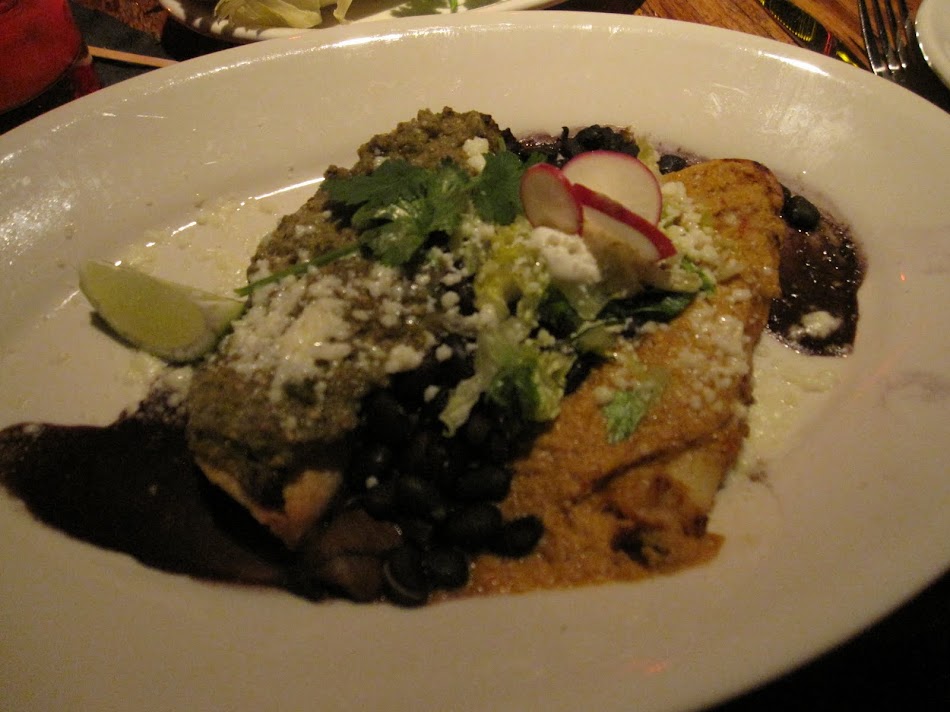 We tried two side dishes, first the corn bread which came with a roasted garlic sauce over the top and was heavenly. Seriously it was one of the most incredible things I have ever tasted. I would go back just for that. 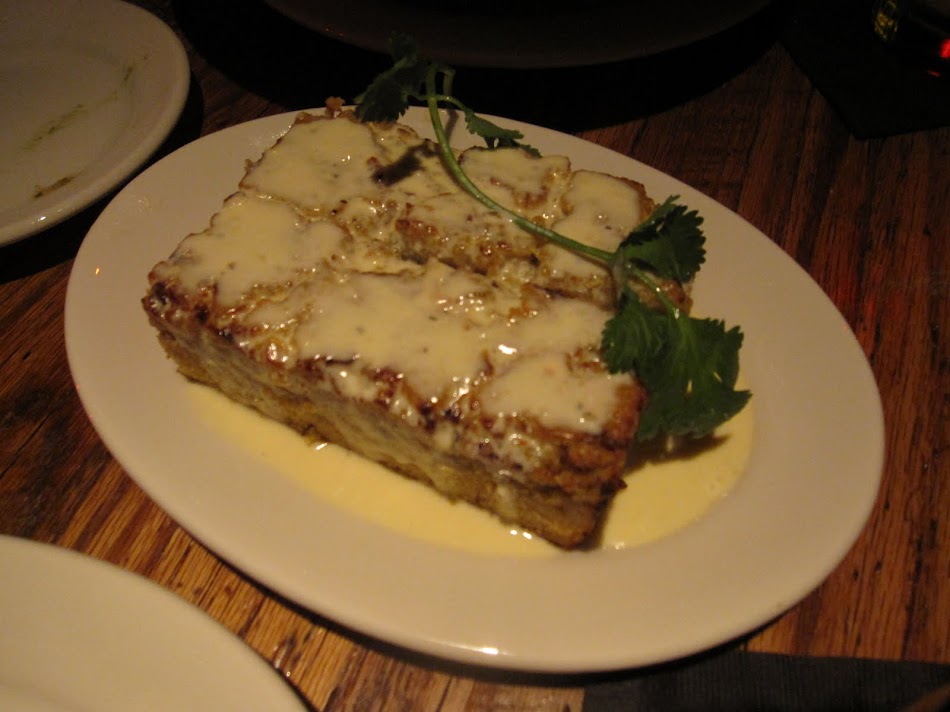 We also tried the zocalo corn which came in a beautiful presentation and tasted superb. 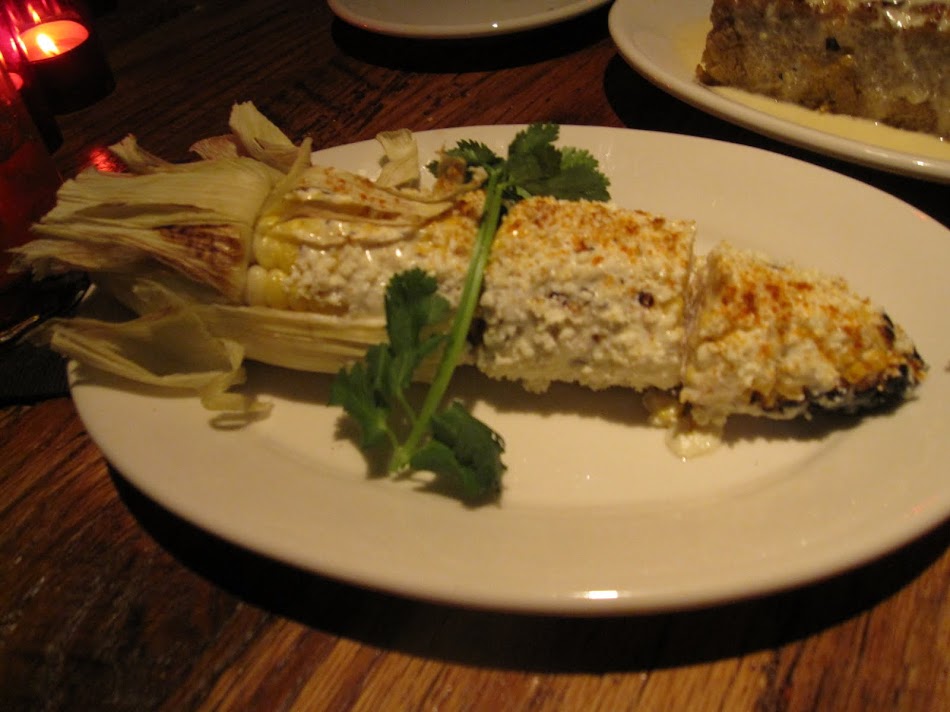 Though we were quite stuffed our waitress brought over the dessert menu and one item jumped out at us: the fried ice cream. When it arrived all three of our mouths dropped. It was a large scoop of ice cream, wrapped in corn flakes, fried and then served with a chocolate dipping sauce. It was insanely decadent and gone in about thirty seconds. 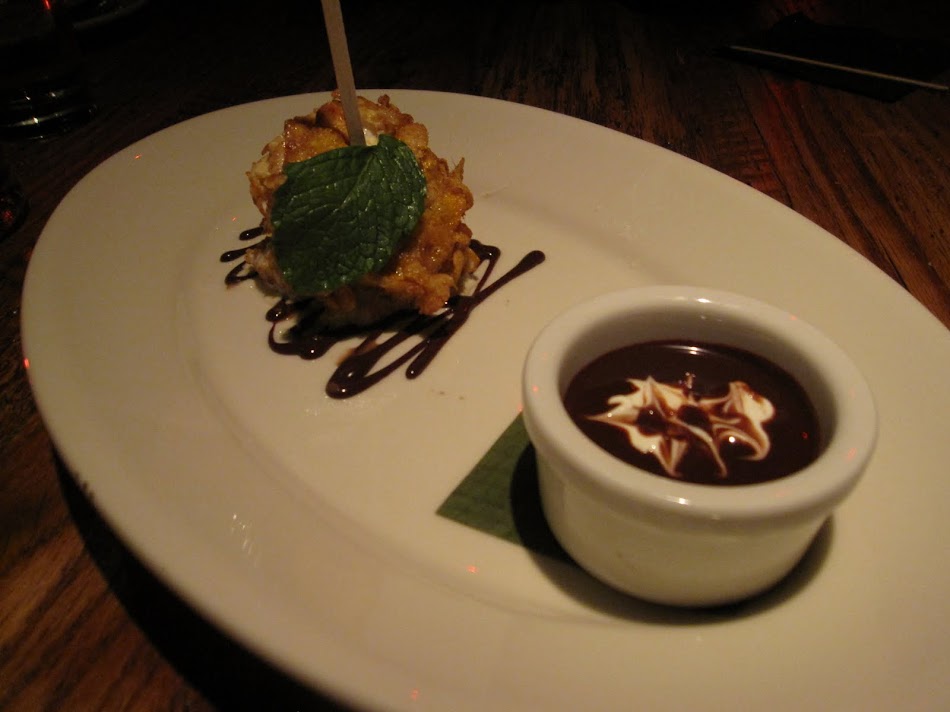 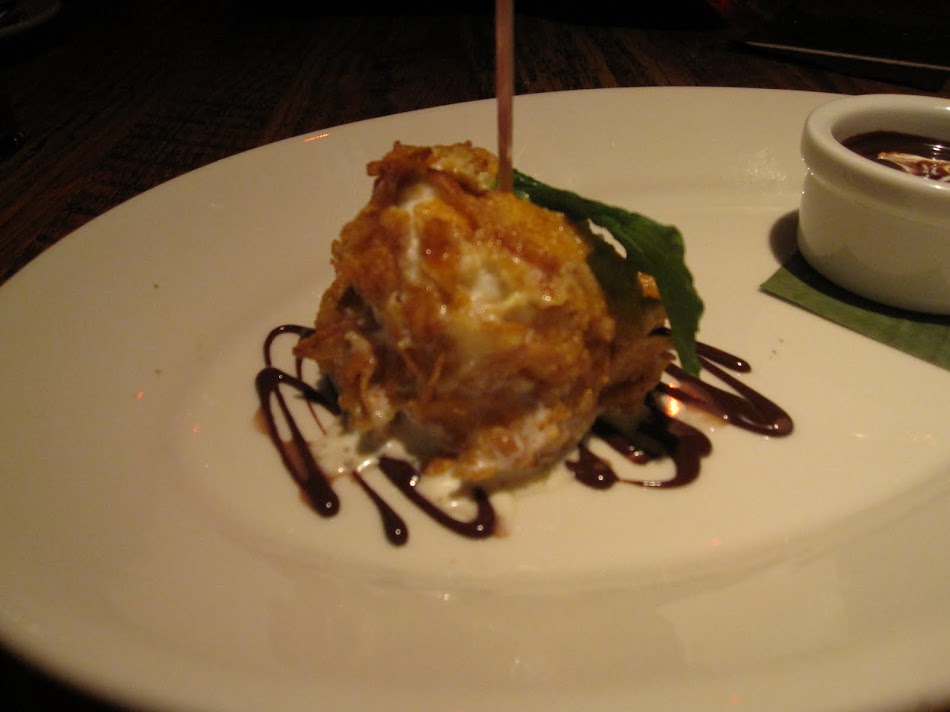 Once we had licked our dessert plate clean our waitress returned with the check and two surprises! First an enormous cloud of cotton candy sprinkled with red pop rocks and a small plate with a warm, wet towel and three Lolita temporary tattoos! 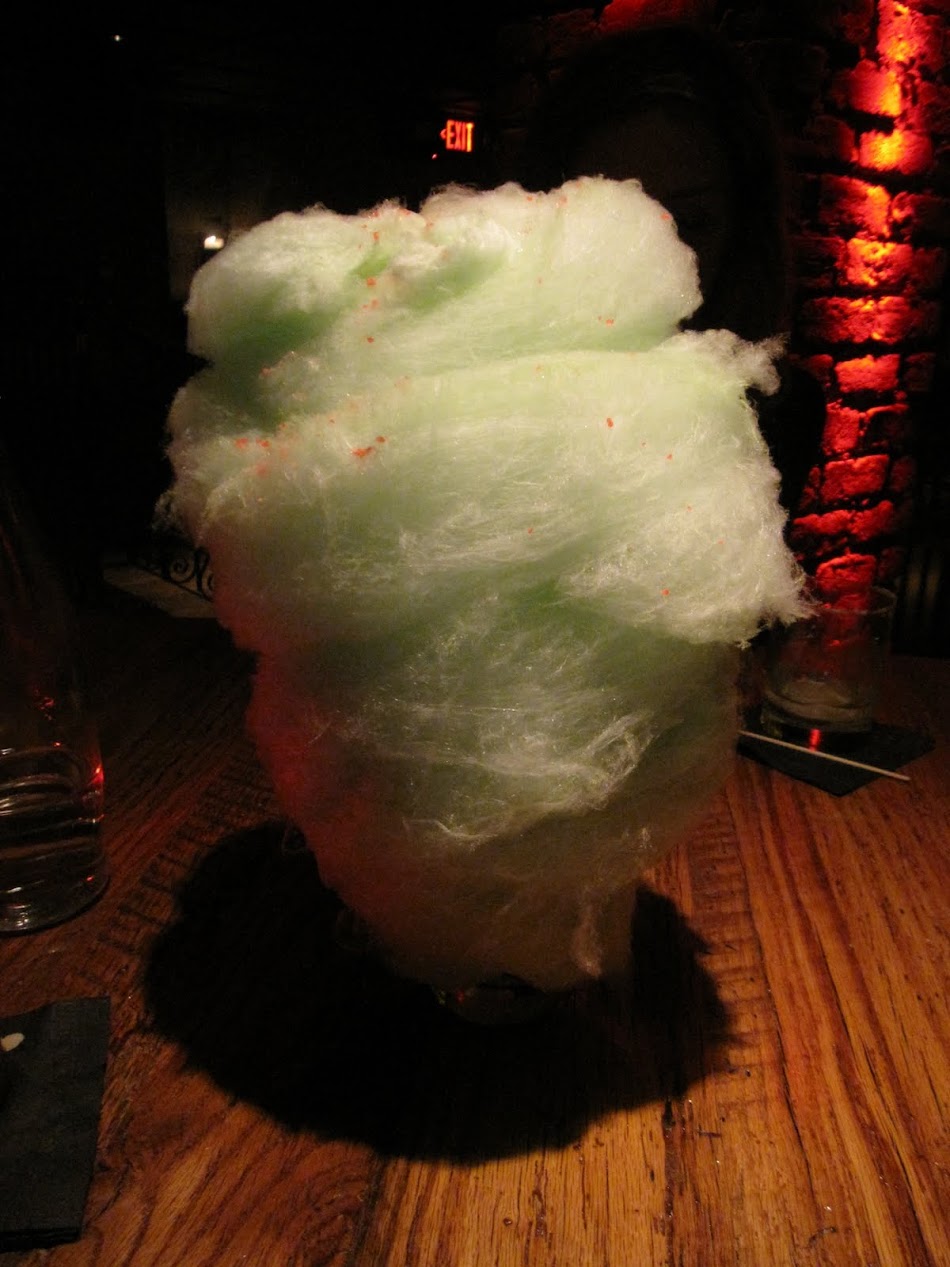 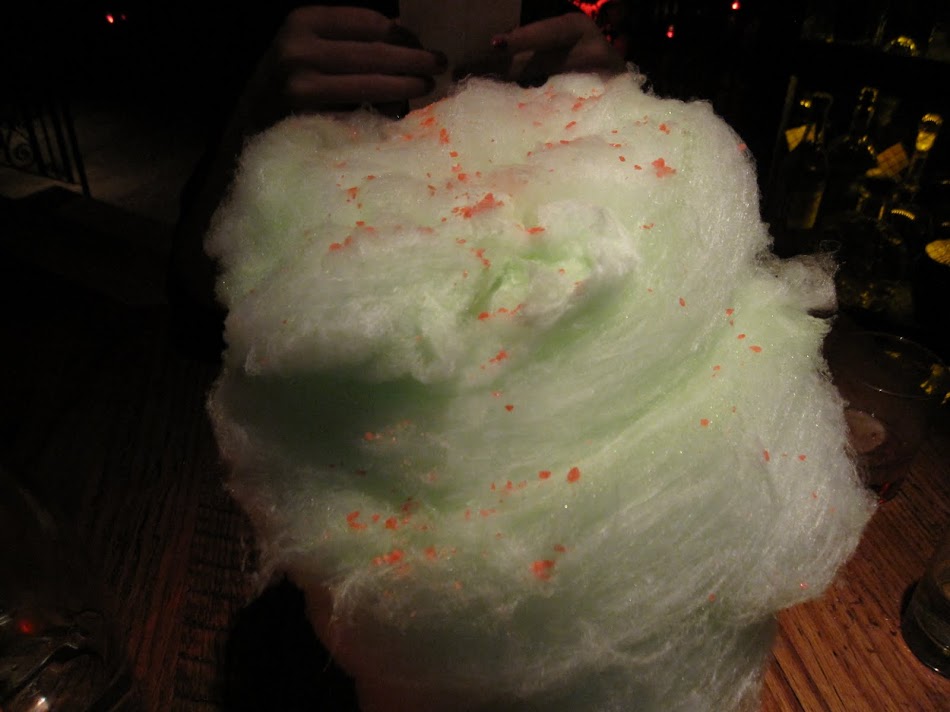 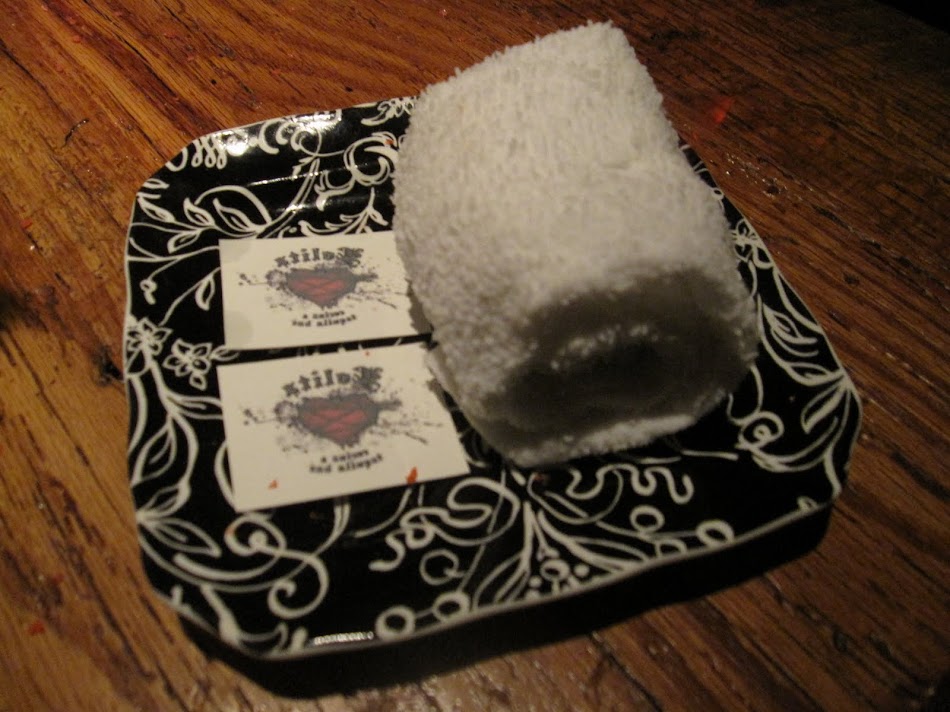 Of course I had to put the tattoo on immediately. 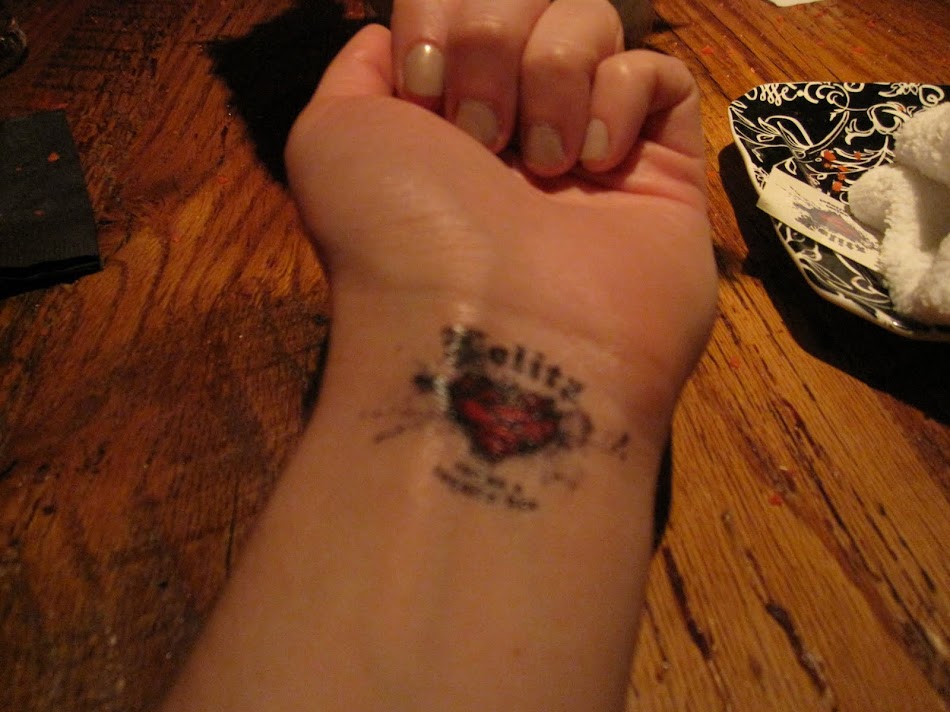 I go out to eat with these two girls once a month and we've frequented several amazing Boston spots and we all agreed this may have been the best meal we've ever had together. The restaurant was beautiful, our waitress was friendly, knowledgeable and attentive, the food was exceptional and there were so many cute, unique touches. We were also in complete agreement that Lolita would be perfect for a birthday or bachelorette party. Make a mental note, ladies.

Just when we thought it couldn't get any better, we decided to use the ladies room on the way out and were amazed by how beautiful it was! So much so we felt compelled to document it. Yes, I took pictures of the ladies room. 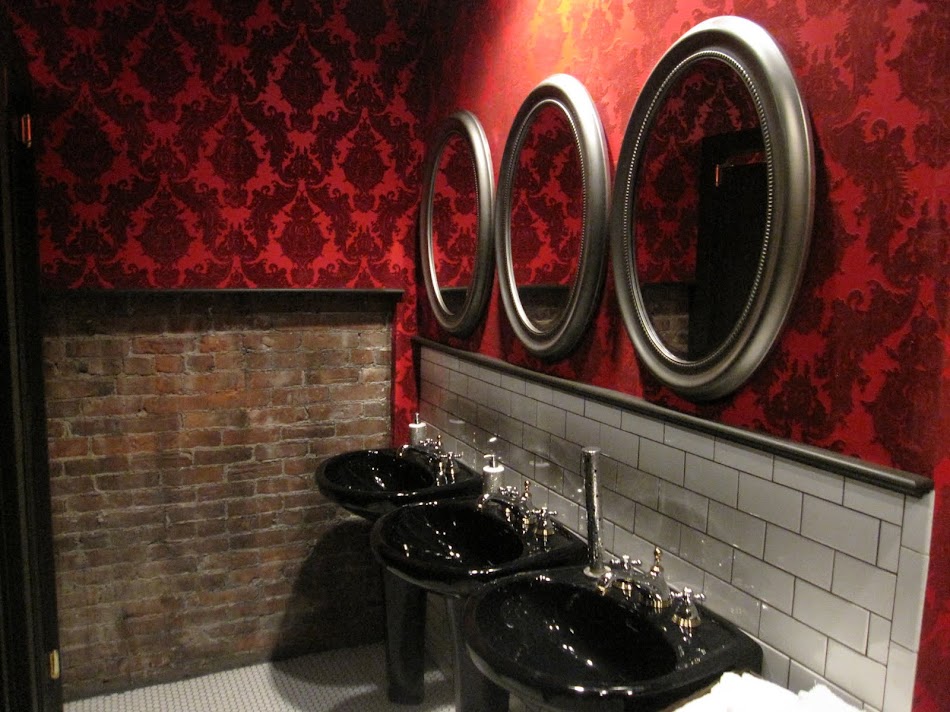 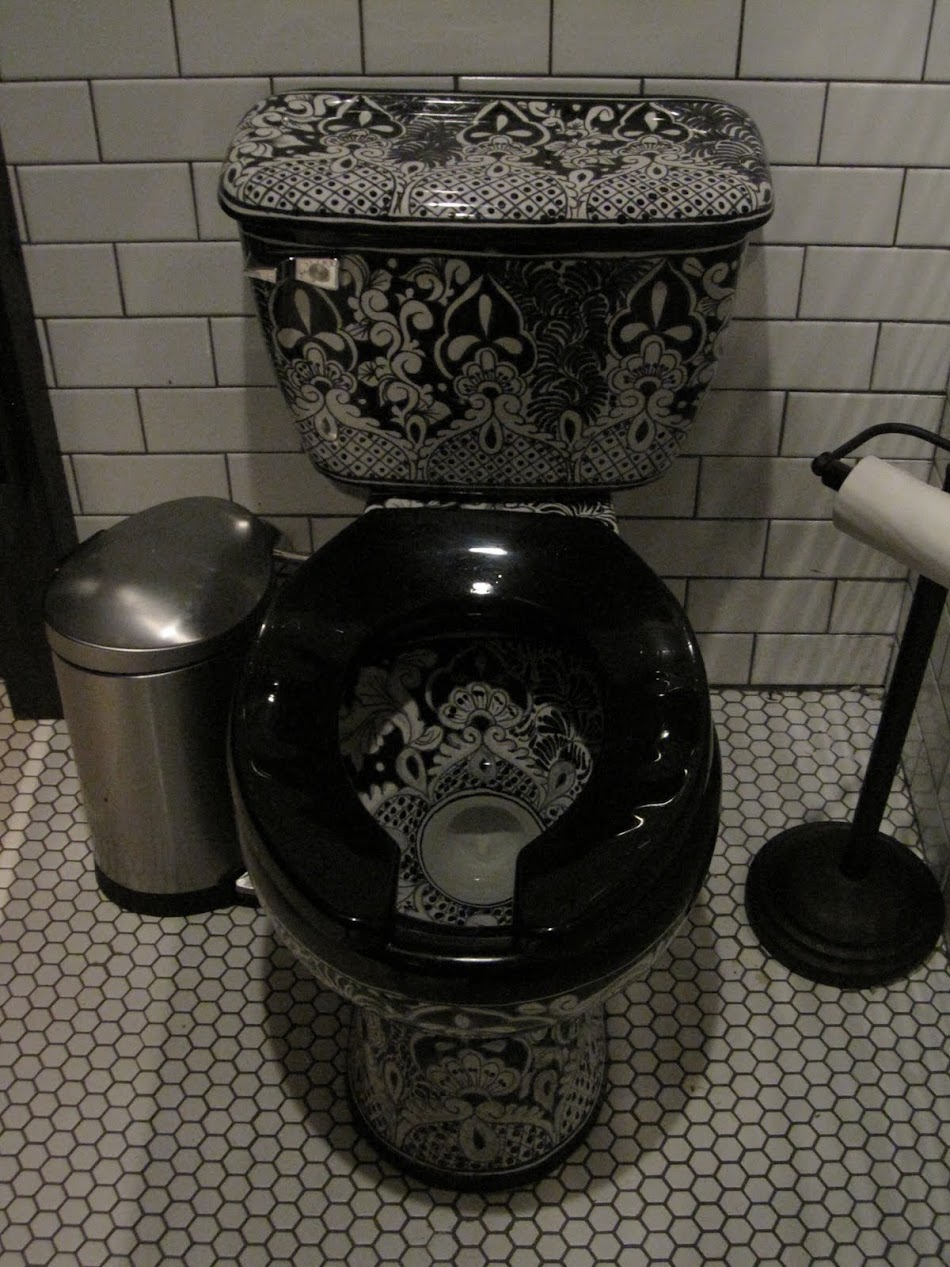 Make sure you spend your next night out with Lolita.

I equally enjoyed Lolita when I went there a few weeks ago. I didn't check out the bathroom so thankfully you took pics ;-)

1. I love that you said "it is a school night."
2. LOVE that you took pics of the loo. Honestly, HELPFUL! and in this case, stunning.
3. This review was awesome. Jess and I are already planning to go there on a date night as a result!

Congrats again on your high-placing finish! You're the best, lady :) xoxo

Michelle - Glad you enjoyed the bathroom shots! I felt a bit odd snapping them, but it was too beautiful not to share!

Meredith - Let me know what you and Jess think when you go! Perfect for date night!

Thanks for the write up Molly! Went to Lolita last night. I thought it was amazing!! Such an interactive restaurant...perfect for a first date!! The decor was fun and reminded me of the bar Fangtasia in True Blood. : )

Maeve - THRILLED to hear you loved Lolita! I can't wait to go back. 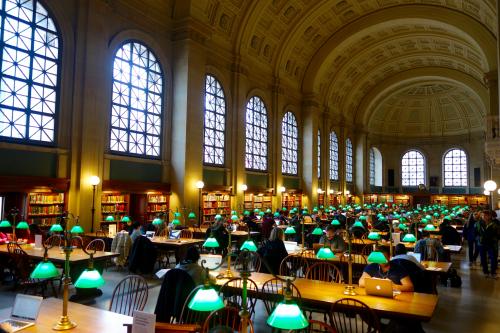 In January 2016 I shared a list of new year's resolutions. Number eight on the list was "explore the Boston Public Library." Despite living in Boston for all 32 years of my life, I had never set foot in there! I had walked by a thousand times, but I was determined 2016 would be the year I actually stepped through the doors. 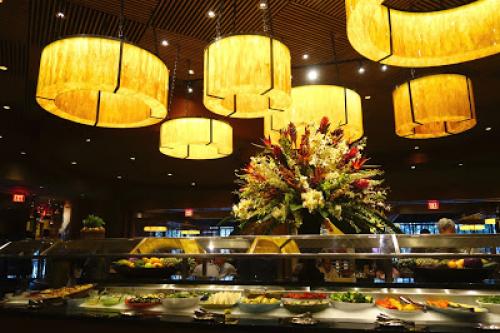 Last week I made my first ever trip to Fogo de Chao, the famous Brazilian steak house. Now, I know what you are thinking, "What can a vegetarian possibly eat at Fogo de Chao?" Well, it turns out, quite a bit! I left work and took the green line over to Copley to meet my dinner dates, my cousin and his girlfriend. Fogo de Chao is located on the first floor of the Westin Hotel, right next to the Boston Public Library. 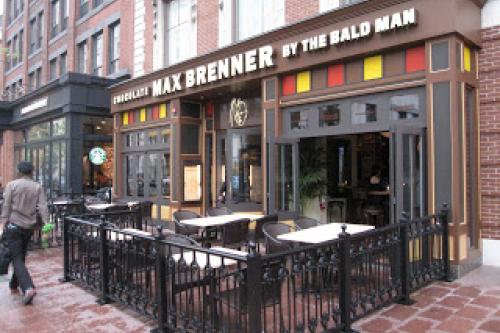