Read: Love is a Mix Tape 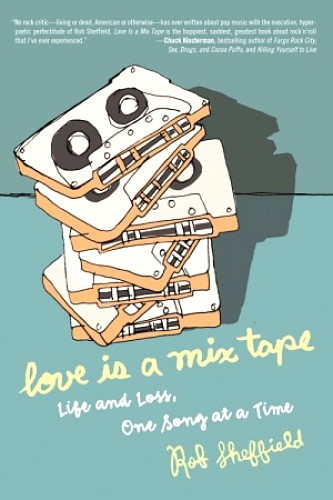 While on vacation in Miami this weekend I read a book titled "Love is a Mix Tape." The book tells the story of how Rob falls in love with Renee, through memories attached to songs on a stack of mix tapes.

The author, Rob Sheffield, is a writer for Rolling Stone magazine. He lives and breathes music. He found his musical match in Renee, a Southern spitfire who could not have been more different than his Boston born, Irish Catholic self. The two bond over favorite bands, seeing live music and the way sharing music with another person can be the best and most vulnerable way to share yourself.

Sheffield has a way of describing how a song can take you back to a certain time unlike anything else. How when you hear those first notes you can remember what you were wearing, what the weather was like, the smells around you and how you felt the first time you heard it. He poignantly puts into words a feeling that is often indescribable.

"Love is a Mix Tape" is about people connecting, making memories, and reliving those times with the simple push of the button that reads "play."

This book will touch you and make you rethink chucking those old tapes.

END_OF_DOCUMENT_TOKEN_TO_BE_REPLACED

Phoebe Damrosch's Service Included brings you behind the scenes of Chef Thomas Keller's Per Se. If you love dining out, you'll devour this book.

Read: Why Not Me?

I think it's fair to say that when it comes to Mindy Kaling, I've achieved super fan status. When her show was on FOX, I wrote recaps for every single episode, even helping you track down some of the best fashions featured on the show. Last year I did an entire holiday gift guide for the Mindy fan in your life and when Mindy published her first book, "Is Everyone Hanging Out With Me?