Upper East Side Special: Love Triangle On The Rocks

This week on Gossip Girl two love triangles dominated the evening. First, we have Gabriel, the mysterious, preppy entrepreneur who bounces between Serena and socialite Poppy. I must say, the man is a great liar. You never see him sweat.

Then we have the predictable triangle of Blair, Nate and Chuck. This is a sad one. I love Nate, and he's been through so much with his father, that I just want him to be happy. Right now, he finds happiness with Blair. But, I have been rooting for Blair and Chuck for so long now, its almost instinctual to want to see them together.

In a sad attempt to ensure he can keep his eyes on Blair, Nate rents an apartment in Murray Hill, half way between Columbia and NYU. A grand gesture, but one Blair sees right through. Kudos to the GG writers for a very funny exchange in which Nate tries to teach Blair to take the subway. In the words of the great Alicia Silverstone "As if!"

There was one panic moment this episode, when Rufus throws a big chunk of money at Gabriel, to invest in his start up company. Gabriel seems to have no problem stealing from Lily and her wealthy condo association friends, but he seems to have some remorse about screwing over Rufus. Here's hoping Gabriel just rips up Rufus' check.

There was also an odd moment in this week's episode where Dan and Vanessa are drunk, lying on the floor of the loft, talking about Dan not getting to go to Yale. Didn't it seem like Vanessa would roll over any minute and start making out with him? Weird vibe.

And we cannot forget the return of Georgina! Originally just a ploy to confirm Gabriel didn't really meet Serena in the manner he suggested, Blair and Chuck's visit to see the former bad girl results in her returning to the city with Chuck. This can only mean more drama!

My most favorite moment in the entire episode was Chuck sporting a purple, popped collar while playing basketball with Nate! Who else could pull that off?

US Weekly pictured two major spoilers this week - Serena and Blair's prom dresses! Looking forward to the high fashion, and the return of Nelli Yuki!

END_OF_DOCUMENT_TOKEN_TO_BE_REPLACED

It's pandemic week #30. Having streaming decision fatigue? I've got you. Six picks for your viewing pleasure.

Last night's episode of Gossip Girl had me screaming, "What?!" at the TV just about every two minutes. There were bombs going off everywhere! William returns - Boom! William is Lola's father - Boom! Cee Cee leaves all her money to Ivy - Boom! Ivy kicks Lily out of the apartment - Boom! Ok, enough exploding. Let's dissect. The episode opens with Lola and Nate in bed together. Lola is wearing Nate's pajama top and he is wearing the bottoms. This never happens in real life. 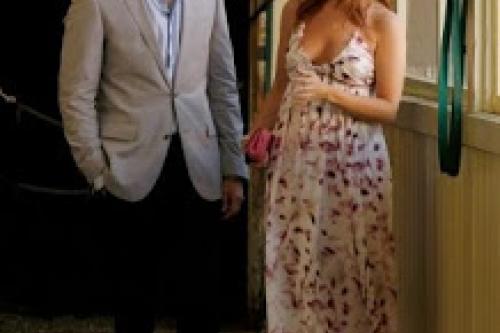 Gossip Girl: The Good, The Bad, The Ugly

Last night, I sat on the edge of my couch waiting for the return of my favorite Upper East Side socialites (you know you love them, xoxo