This week on the season finale of The City, the show opens with Alixe, Whit's boss at DVF, informing her and Olivia that this week they will be deciding on one of the two of them to go to London to work with the London PR team. After Olivia's stunt with the Elle cover, Whitney is less than pleased to be paired up with her again for anything, especially a head to head contest for one spot.

Across town at One Management, Erin is working away when Adam arrives and asks to talk to her. This reminded me of the many times of The Hills someone would spontaneously show up at someones work to force a conversation. Both shows have the same executive producer. He clearly favors the work place drama.

Adam basically tells Erin that she is driving him and Allie apart and she needs to mind her own business. In fact, he takes it one step further and says "How many guys do you date at a time? You're a player!" He has a point. But still, he should not have blind sided her at work, and raised his voice in her office. Bad Adam.

That night Whitney calls LC back in L.A. to say she feels like she may have made a mistake coming to NYC. LC answers the phone while at People's Revolution (no sign on Kelly Cutrone, but LC was whispering so maybe she actually was there, waiting to yell at Lauren for talking and not working). LC urges Whitney not to give up a fantastic job for a guy and to learn from her mistake with the whole Paris/Jason situation. Glad to see LC is humble enough to use that misstep as an example.

That night at Erin's, Erin tells Allie about Adam's surprise drop in at work. Allie is embarrassed but kind of flattered also. Total masochist.

Its Fashion Week in NYC and the DVF team is setting up for her runway show. In the front row are Anne Wintour (if you don't know who that is, you don't deserve to read this blog), Diana Ross and Julia Stiles. Back stage Olivia is chatting with the U.K. PR director and once again takes credit for the Elle cover look. Olivia has lied so much, I think she is actually starting to believe that she did in fact pull the look.

Whit finally confronts Olivia and demands that she give credit where credit is due. Olivia laughs it off and makes Whitney feel trivial. Karma's a bitch Olivia. You'll get yours.

Post-show DVF has an after party and Whitney is sitting by herself. DVF herself comes and sits beside her and asks "Why are you sitting alone? What's wrong? What is going on with the boyfriend?" Whitney tells Diane about Jay, and she gives some strange analogy about absence is like the wind to a fire, if the fire is small, the wind puts it out, if the fire is large, the wind fuels it. She lost me, but ok. She also tells Whitney "The most important relationship you have is the one with yourself." This is the final line in the series finale of Sex and the City. Diane, you plagiarist!

Meanwhile, across town Allie goes to visit Adam at work and confront him about his attack on Erin. He tells Allie how much he misses her and he wants her to move back in. She says she can't handle all the lying, the cheating, the hiding. He says he is done with those ways. She asks "do you promise?". He answers yes and like the fool that she is, Allie believes him. This lead to - I love you. No, I love you more. No, I love YOU more. Gag me.

Back at the DVF after party, Olivia finds out she will be the U.K. liaison and decides to tell Whit right then, at the party. Totally deflated, Whit just blows past her.

Just then Jay calls. He is outside the building. WHAT? Shouldn't he be on tour reveling in his freedom with groupies? Whitney goes out to meet him and there he is, looking gorgeous, in a full suit. That helps your cause.

He says: It took me going away to realize I really love you (I SQUEAL)
Whit: Its too little, too late Jay
Jay: You don't love me?
Whit: I lost myself in us. I need to focus on what I came here to do.

UGH! WHITNEY! Just as I was hoping for a reconciliation! And US Weekly had led me to believe in real life they are in fact still together. So confusing!

In the final moment, Whitney walks away, leaving Jay alone in the street.

I would be depressed the season is over, but the preview for the premiere of The Hills looks AMAZING. Despite Lauren's tragically dark red lipstick, the reconciliation of Lauren and Heidi would be revolutionary.

END_OF_DOCUMENT_TOKEN_TO_BE_REPLACED

Roll Out the Red Carpet! Its Award Season

Its the most wonderful time of the year! No, not Christmas. Award season! 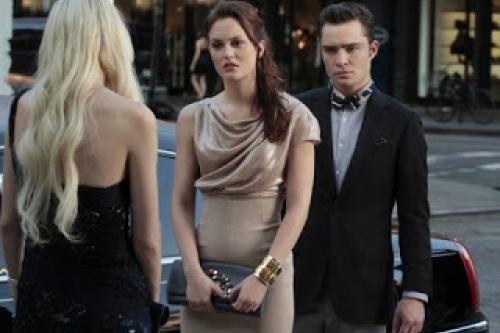 This week on Gossip Girl Serena wakes up in the bed of "Collin the cab stealer," who she later discovers is her new business professor. After an adorable, flirtatious exchange Collin convinces Serena to drop the class for the semester so they can pursue a relationship. Naturally Collin's character would have written a book that Serena could pretend to read. Classic.