Before I can begin to comment on this week's episode of The City, I must say, I will do whatever it takes to track down Whitney's flower, knit headband. I must have this winter accessory!

This week, while Whitney and Jay are on solid ground, another relationship is due for an earthquake. Jay's roommate Adam, has a girlfriend named Allie. She's a model and has recently moved in with Adam and Jay. Allie is about to leave for a photo shoot in another country (poor thing) and no sooner has she gone through airport security, than Adam starts to plan a big guys night out.

Adam and Jay hit the clubs, and bump into Whitney's friend Samantha, and Sam's friend Cat. We don't see how the night ends, but we do see the girls meet up the next morning (where Whit is wearing the gorgeous flower headband and Erin is rocking a blue hat that looks like it came from the Goodwill reject pile). At brunch Samantha reveals that she received a text that Adam made out with Cat. Uh oh.

Whitney meets up with Jay after brunch (who is also sporting a hat, a Cleveland Indians cap) and shares with him the news of the text. Jay backs up his boy and says, Adam has a girlfriend, he would never do that.

Then Jay scurries home to share with Adam the news that is bouncing around the rumor mill. That night Adam picks up Allie at the airport, and no sooner than she buckles her seat belt, does Adam start to defend himself. He asks if she has talked to Whitney (she says no) and he goes on to say, a rumor is going around, its untrue, I love you, I would never, blah blah blah. Allie is clearly hurt, but decides to play it cool and say "I hate when girls make things up just to create drama". I could feel Adam's deep breath through the TV as he exhaled a sigh of relief. Off the hook for now, buddy.

Later that week at Cafeteria (which I have been to!) the girls, plus Allie meet up to dish. The ladies warn Allie that Adam is messing around while she is gone. During this entire conversation Allie looks so hungry. They are at a great restaurant, but she doesn't seem to be eating.

The girls leave, and Allie calls Adam, and tells him to come meet her. Adam shows up, and is accused of lying about kissing Cat. He keeps denying it, keeps saying how much he loves her, and that he never wants to make her cry, which of course, she is now doing. Allie and Adam stand, crying and kissing on the sidewalk, in the rain. How poetic.

The side story this week involved Olivia's cousin Nevin. Apparently he refuses to work, and is now crashing on Olivia's couch. Classy.

Scenes from next week show Erin's boyfriend is back in town from Toronto, and Whitney and Jay celebrating what seems to be New Years Eve together. Looks like a night of break ups and make outs! See you next week, city girls!

END_OF_DOCUMENT_TOKEN_TO_BE_REPLACED 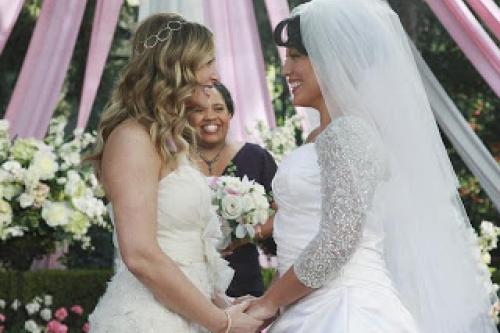 This week on Grey's Anatomy Callie and Arizona got married! It's hard to believe that just last episode Callie was still recovering from the accident. I know the show sped through twelve weeks over the course of last week's episode, but it still feels quick.

Quarantine, week 18. Six new shows and movies to help with your decision fatigue!

American Idol: Diamond In The Rough

This week, the American Idol audition tour stopped in Austin, TX and Los Angeles, CA. Overall it was a week full of joke performances (which I hate). During Wednesday's show, I was about to roll my eyes for the 20th time when a star emerged! Casey Abrams, a seemingly sheepish, nerdy guy opened his mouth and belted Ray Charles' "I Don't Need No Doctor." Check it out: Holy moly! I love this kid!